The Android numbers are in, and as you’d expect, not much has changed. The updated chart still shows Android 2.3 Gingerbread with more than 60%, Ice Cream Sandwich nearing the 20% mark, and Jelly Bean finally making its appearance with less than 1%.

Android 2.3 won’t be overtaken anytime soon, as it’s currently holding onto 60.3% of the pie, leaving a 44.7% gap between the next largest version of the OS. Ice Cream Sandwich saw a bump to nearly 16% of all devices, and Jelly Bean finally joined the party with a whopping 0.8% share. Given that Android 4.1 is officially available on about three devices in the world right now, the >1% mark isn’t much of a surprise and hopefully we’ll see a much bigger bump in the coming months. 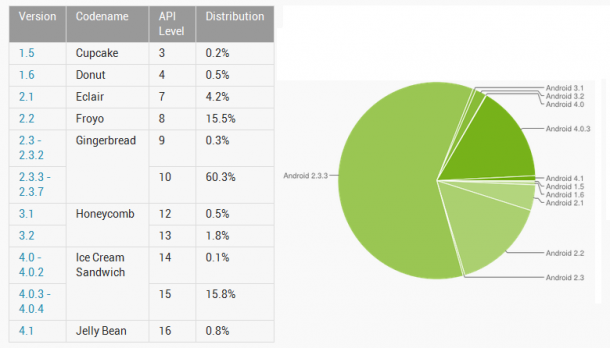 Cupcake, Donut, Eclair, and Froyo still manage to take up more than 20% of the chart, all of which have been languishing for quite a while but don’t look like they will be departing anytime soon.

There have been quite a few handsets that recently received the Android 4.0 update, so we can imagine that the next chart will show Ice Cream Sandwich getting a increase a fair amount next month. Jelly Bean will likely take some time to get a nice chunk of the chart, but maybe a family of Nexus devices will help catch it up to speed?