Just in time for Halloween is the Slash Monsters game for iOS from Fishing Cactus. It’s not totally Halloween-themed, but this game does feature plenty of undersea monsters slowly approaching you and it’s your job to slice ’em. It’s somewhat like Fruit Ninja, except there’s a legitimate themed background instead of a wooden board and the monsters aren’t being thrown across the screen.

When you launch the app, you are created with the main menu. It’s a bit cluttered with options for my taste such as help, email support, Game Center, credits, and more, but if your goal is to just play the game, the big green button on the bottom right is unmistakable. Once you tap that, you’ll be brought to Level Select. Naturally, the first level is enabled automatically. If you’d like to skip ahead and unlock other levels, you’d need to use up your pearls or buy some — more on that later.

Once you start playing, you are brought under the sea and monstrous-looking squids and sea creatures will immediately begin coming out from behind plants or other objects and moving toward you. You’ll have to quickly slice them with one finger to kill them. (Don’t worry, the slicing part isn’t bloody or graphic.)

It sounds simple, it is simple, but it does get mildly addictive. There’s 6 worlds and 36 levels to complete and each time you have to challenge yourself to improve your score and unlock new achievements in Game Center. When you move on to new levels, there’s new monsters that require special actions to kill. Some split into two upon the first slice while others need a circular-motion slice. You can also get combo points if you slice and kill multiple monsters in one movement. 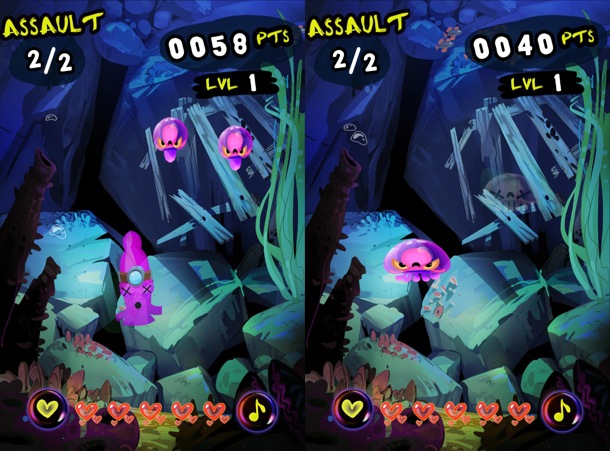 If you want an extra boost of happiness within the game, pearls are the virtual currency that will help you get further ahead with less effort. They can unlock levels without beating previous ones or rejuvenate your health when you are near death or dying. Fishing Cactus sells them in Slash Monsters in packs of 5, 25, 50, 150, and 800 ranging in price from $0.99 to $9.99. If you ever need to spend $10 to get 800 pearls, you should probably reevaluate the life choices you made which led you to that point. You can additionally get some free pearls by, for instance, liking the Facebook page.

I did enjoy the game in my time using it and I’ll probably keep it on my iPhone for now. It has crashed a few times on me or thrown some leaderboard error alerts in my face, but that’s nothing that can’t be fixed with a software update. Speaking of updates, the game does not yet support the iPhone 5, which means for now you’ll have black borders on the top and bottom. I have confirmed with Fishing Cactus that an iPhone 5 update is in progress.

Slash Monsters is free in the App Store for iPhone, iPod touch, and iPad. It’s likely best suited for kids and teens, though I could easily see the game being adopted by older players as well. It’s fun and worth a download.

Apple has just announced their Q3 2012 earnings, and the company had a stellar quarter, beating many Wall Street estimates....