The tablet market is beginning to show some slight changes, as Apple sees a slight decline in iPad sales. Global tablet shipments were huge in the fourth quarter, thanks to a stronger than expected holiday retail season. Worldwide shipments reached a record 52.5 million units last quarter, which is a 74 percent increase over the previous quarter, and 75 percent jump over Q4 2011. This is all according to the latest report from research firm IDC.

Of course, Apple led the way with tablets shipped, with 22.9 million units pushed out and a 43 percent market share. However, the iPad maker seen its share of global tablet shipments sink to 43.6 percent in the fourth quarter compared to last year’s 51.7 percent. On the other hand, it’s bitter rival, Samsung, watched its share of the market more than double from 7.3 percent to 15.1 percent when comparing the same quarter year-over-year.

The rest of the competitors rounded out with Amazon taking third place with 11.5 percent market share, fourth place to Asus, and fifth place to Barnes and Noble. Microsoft didn’t make the top five, but the research firm believes the company shipped around 900,000 units last quarter.

“We expected a very strong fourth quarter, and the market didn’t disappoint.” He continued saying, “The record-breaking quarter stands in stark contrast to the PC market, which saw shipments decline during the quarter for the first time in more than five years.”

Checkout the chart below. 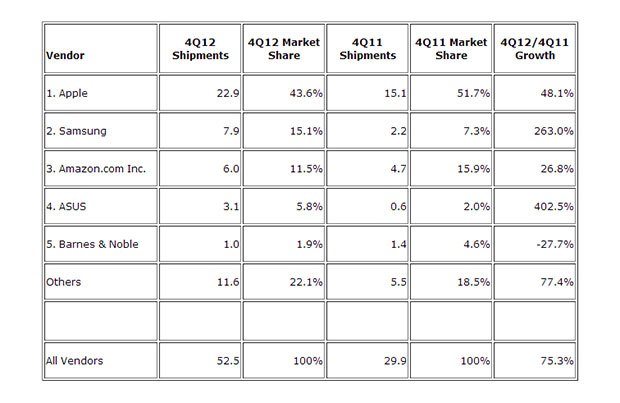 You don't necessarily have to know about Karbonn smartphones. No one does, except folks in India's mobile industry. Their latest...