Light gun shooter, Duck Hunt, is an iconic artifact from the NES era. It’s referenced constantly in pop culture and has spawned several homebrew sequels. It’s mentioned in the same breath as great NES franchises that live on to this day, like Mario, Megaman, Metroid and (to get away from the M’s) Zelda.

The gameplay was simple, but the difficulty ramped up quickly. The maddening pace gave the game some major replay value, luring players back to try to get just a little further

In Duck Hunt you shoot at the titular Ducks (as well as some clay pigeons – should you be so inclined) with Nintendo’s Zapper light gun peripheral.It’s presented in a first person perspective, allowing you to aim and fire at the targets on the screen with a fair amount of accuracy.  Each round consists of a total of ten targets to shoot. Depending on the game mode, one or two ducks will appear on the screen at any given time and the player has three shots before they fly away. 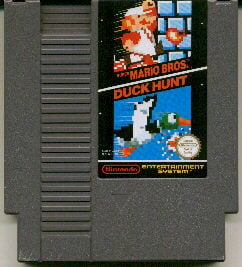 Duck Hunt had a standalone release as a launch title for the NES in 1985, but most folks played it as part of a combo cart.

The ubiquitous Super Mario Bros. and Duck Hunt combo cartridge was blown into by many an American kid, in effort to get at the goodies within. Included in probably the most popular NES bundle, the 2 game cart  had a production run so big it fell somewhere between copies of Wayne’s World on VHS and the Bible. A later version even threw in Powerpad title World Class Track Meet.

Super Mario Bros was a console mover, Duck Hunt was a bonus. That’s not to say Duck Hunt was filler. Far from it, Duck Hunt showcased the NES Zapper peripheral and brought realistic gunplay to the living room. Duck Hunt was the first Light Gun game that most kids in the U.S. ever played.

While Super Mario Bros’ greatness is unquestioned – it being the first chapter in one of the greatest game series of all time, and an incredibly deep game in its own right – Duck Hunt left its mark on a generation too. More of a scar, really.*
You see, for gamers of a certain age the phrase “Duck Hunt” can be as much a trigger as the wedge of orange plastic on the NES Zapper.You have a sweet looking bird dog as your companion in your hunting excursion, there to helpfully grab the ducks you hit. A sweet, jolly seeming fellow he is, someone who’d never turn on you…… or so you think. 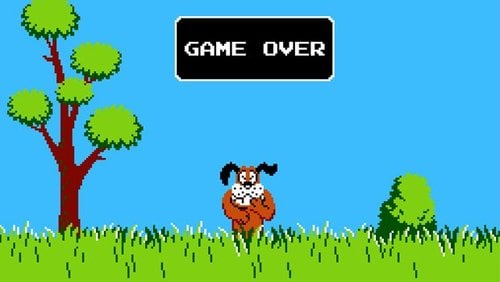 The dog was the ultimate frenemy, quick to ridicule you when you have a bad round. Laughing RIGHT IN YOUR FACE.

Picture yourself 25 years ago sitting on an orange shag or pleather couch in front of a crackling tube TV. The 8 bit laughter washes over your tiny frame you and feel yourself well up with hot shame.

Seethe as he taunts you and chuckles at your ineffectual squeezing of the Zapper’s trigger. Feel your blood boil when you realize that no matter how many shots you pump into him, the cur will not die!

The Duck Hunt dog  introduced the children of a  generation to the very notion of their own powerlessness. That dog was every bully, every boss, every traffic cop, drill sergeant or vice principal. You felt his cackle in your very soul.

Some set out to improve, to show that floppy eared bastard that they were good enough, that they didn’t have to take his abuse. Like Rocky, they trained and trained until their thumbs were blistered and their butts were numb.

Others collapsed on the floor, NES Zapper pointed at their temple in utter resignation.

Duck Hunt and other early gun games like Hogan’s Alley paved the way for later arcade greats like Area 51 and House of the Dead as well as the Playstation Move and Wii remote. We all owe Duck Hunt a debt of gratitude.

But the dog. We owe that dog something else entirely.

*Just to be clear, this is totally meant as a joke.

Mega Man Gameboy Titles Coming to a 3DS Near You!

Some of the best Megaman games came out for Nintendo's Gameboy handheld. Today it's come to light that Megaman's Gameboy adventures will...