While everyone’s patiently waiting for Rockstar’s next Grand Theft Auto to blow our minds once again, 3 of the company’s classic games are available now on Google Play. If you were on the fence about snagging them, today’s price drop might sway you.  You can get both Grand Theft Auto  3 and Grand Theft Auto: Vice City for only $2.99 each. The original Max Payne is only $1.99.

I grabbed a copy of Vice City, an old favorite. It shows its age graphically but the flashy, 80’s style holds up. Tommy Vercetti, the Hawaiian shirt clad mobster protagonist controls decently with the touch screen and still mumbles his little excuses like “I NEED this” when carjacking random citizens of Vice City. The car controls were never great and they suffer even more from the touch screen, but its nothing you can’t get used to after a few minutes of play. 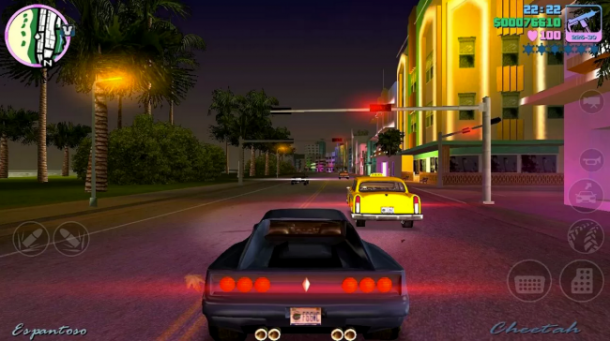 The radio stations and all their hours of licensed and original music appear to be intact as well, something I found pleasantly surprising. Get ready to hear the sounds of Lovefist’s hits as well as a perfectly curated survey of 80’s music!

Maybe I’m just old, but the idea of playing a full-fledged version of Vice City on a smart phone seems like a crazy technological marvel to me. I just remember that game being so huge. While it shows its age a bit, GTA: Vice City really holds up and is a steal for just 2.99.

Rockstar’s other sale titles are a huge bargain as well, so get them while you can! The description from Vice City’s Google Play entry talks up the sale and lists compatible devices below.

From the decade of big hair, excess and pastel suits comes a story of one man’s rise to the top of the criminal pile. Vice City, a huge urban sprawl ranging from the beach to the swamps and the glitz to the ghetto, was one of the most varied, complete and alive digital cities ever created. Combining open-world gameplay with a character driven narrative, you arrive in a town brimming with delights and degradation and given the opportunity to take it over as you choose.

Google just took the wraps off of the new Nexus 7 and Android 4.3 at an event today in San...