T-Mobile is putting their new SIM Unlock policy in effect starting August 24. Tomorrow Magenta will begin to enforce the new policy, which helps avoid customers unlocking devices prior to paying off the full price of the device.

Here is a better example of what the changes do, and what they mean:

So as you can see, the new SIM Unlock policy has some good and some bad. One of the grey area is the switch from 60 days to 40 days active service. The reasoning behind this is supposedly to address “fraud,” which doesn’t sound too ridiculous when you think about it. The second not so good thing is the change for unlocked devices you can have a year, as the new policy only gives customers two unlocks a year.

The only saving grace is T-Mobile keeping the same policy in place for people going abroad overseas. Folks can still travel internationally without the worry of their phone not being able to work.

In the grand scheme of things, these new policy changes won’t bother the majority of T-Mobile’s customers, but will piss off a small boisterous minority; the T-Mobile customers who like to unlock their phones. 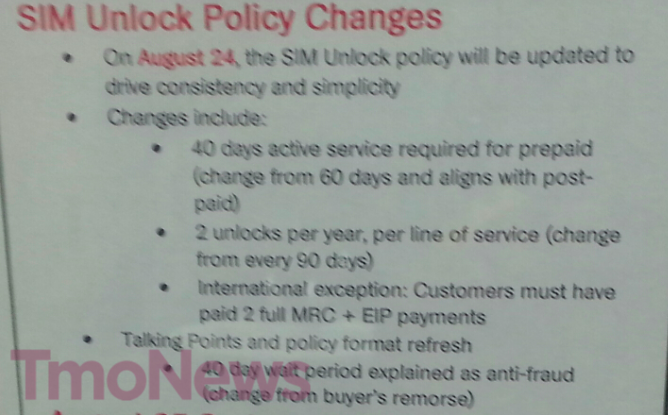