Most users who pirate shows and movies do so because of availability issues, which is common outside of the U.S. But the numbers do show the other side of downloading, where users opt to download the content even when legal channels are available.

Based on data from TorrentFreak, 500,000 had downloaded the Breaking Bad finale within just 12 hours of the torrent going live. This puts the Breaking Bad series finale at the top of the chart for the most-pirated TV show of the year, up there with Game Of  Thrones. 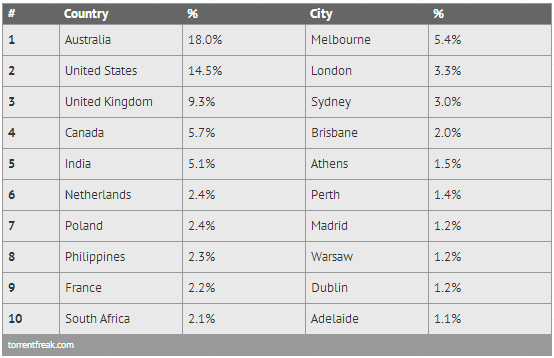 According to the cart above, Australia takes the cake, coming in with 18 percent of the total downloads. The U.S. comes in second at 14.5 percent of downloads, which is interesting considering the myriad of legal ways to watch the show there. The U.K. comes in third with 9.3 percent.

At the peak of the downloading frenzy, one single copy of the Breaking Bad finale had over 85,000 downloaders. If we add up the four most popular torrents, we end up with a whopping 190,000 downloaders.

Samsung, the undisputed kings of bling have been making gold-colored phones for years, and they want to make sure you...