Mamma Mia! A ton of new information about the Nexus 5 and Android 4.4 KitKat surfaced early today, thanks to Italian website Tutto Android. There’s a ton of stuff here to look at, so let’s get cracking!

First off, the camera icon has a new placement on the lock screen. The icon now resides on the lower right corner of the lockscreen, with a swipe from the edge of the screen making the icon available (pictured below). The icon is actionable, with a tap on the icon opening up the camera app. 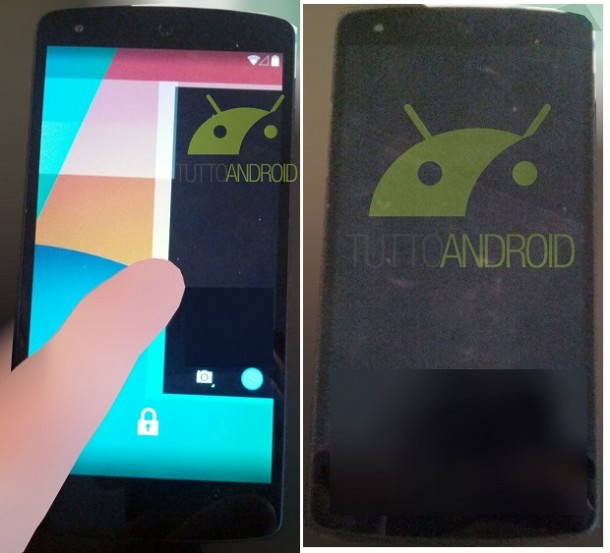 Other KitKat features include Google Now access by swiping up from the Home icon, as well as swiping left from the left most home screen. Google Search could be accessible from the home screen by saying, “OK, Google.”

Also worth noting, a messaging icon is missing from the screenshots. We’ve heard a rumor that Google may be integrating SMS/MMS  functionality into the Hangouts app, and the absence of a Messaging app icon lends more credence to this rumor. Also, the Google+ Photos icon has disappeared, with a Google Photos icon instead.

So there you have it folks, a look at the upcoming Nexus 5 and Android 4.4 KitKat. We’re still not sure exactly when the two will be released, but recent rumors have been pointing to October 15th. We’ll keep you updated, and be sure to check out Tutto Android for more pictures.