I’ve had a chance (thanks VOPmart) to review one of those small Windows 8.1 tablets though this one wasn’t made by a major corporation; rather, it’s coming from a little-known Chinese company called VOYO (or that’s just a brand some other firm is using). In any case, I’ve found it to offer quite a bang for the buck. I’m talking about $190 here, and you can hardly find any comparable device with such a low price tag. Alas, that comes with a caveat, cause if something goes wrong, you won’t be able to bring it to the local service center and would rather have to ship the tablet back to China for repair.

Anyway, here’s what the VOYO Winpad A1 Mini Tablet PC is all about:

As I’ve noted before, this is an affordable device and in that sense I haven’t expected it to look better than similar tablets made by the likes of ASUS, Acer, Lenovo or Toshiba. Nevertheless, the VOYO Winpad A1 Mini is decent looking, offering most of the ports you would need.

Said ports and slots are all placed on the left side, and so is the lock/power key. On the top, there are volume buttons and the Windows key that will fire-up the Metro home. The back is where the camera resides along with “not that powerful” stereo speakers. Finally, on the front, you’ll find a 1.2-megapixel camera sitting left from the 8-inch IPS LCD pixels screen.

The VOYO A1 Mini is powered by Intel’s Baytrail-T Z3735D quad-core chip clocked at 1.8GHz. During my time with the device, I haven’t had any performance issues. On the other hand, I haven’t installed Photoshop on the device nor I intend to. Simply put, this sort of tablets are not made to run big software.

That being said, provided 2GB of RAM seems enough to handle Windows 8.1 and run touch-enabled apps I’ve tried. The A1 Mini — and other 8-inch tablets for that matter — isn’t made to replace your main computer despite running full-blown Windows rather than Windows RT. You only get 32GB of internal storage, expandable with micro SD cards, which is everything but enough to install all the desktop apps you would need. 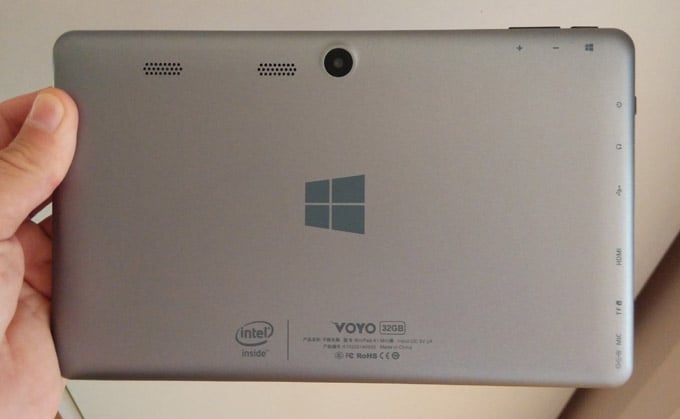 I can’t really say nice things about the camera; you can use it to take photos here and there, but chances are you’re much better off relying on your phone, instead. Front-facing camera will get you through the conference call, though.

The screen produces decent colors and it’s visible under different angles. It’s not as responsive (touch-wise) as I would want it to be, but it works. And even when it seems something’s wrong, I’m not sure whether I have screen to blame or too many apps running at any given moment.

Finally, one thing I really didn’t like – this tablet is charged with a proprietary cable and not micro USB. Why that’s the case is beyond me. You get that cable included in the box, BTW.

You get the basic Windows with the VOYO A1 Mini. There’s no bloatware to deal with — all you get is a standard set of Windows apps. You are free to download additional software from the Windows Marketplace.

Microsoft is still struggling to get significant number of developers on board to make touch-enabled apps, but we’re sure that will be changed in the near future. Some of the major app makers like Evernote offer special “touch” versions that seam inadequate, to say the least. As a big fan of Evernote, I’m sad to say that the Evernote Touch app sucks big time; while editing a note, I couldn’t find a way to hide tags from the left part of the screen.

Most Windows apps don’t support the touch input, but as I said – we’re looking to see that changing soon. In the meantime, you’ll be using your finger instead of a mouse.

VOYO Winpad A1 Mini delivers the goods for $190. In fact, I would say that any 8-inch Windows 8 tablet paid more is money thrown away. And it doesn’t have anything to do with devices, but Windows. Because most apps are designed to be used with a mouse, the touch-based input feels unnatural in most cases.

If you need a tablet for web browsing, checking your email and even some occasional writing — when paired with a Bluetooth keyboard — the Winpad A1 Mini is worth considering. It doesn’t cost a lot of money, after all. You can get it from VOP Mart, which was kind enough to provide me with this review unit… 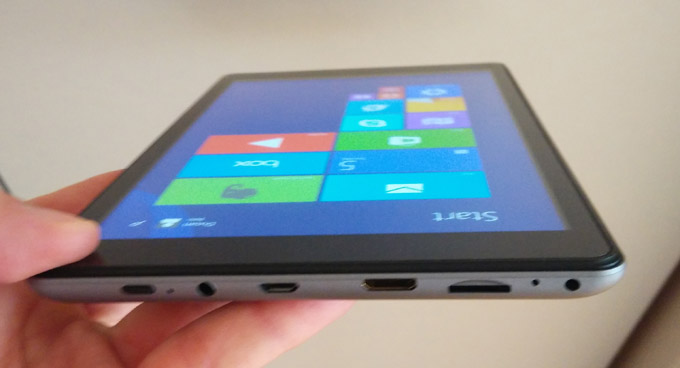 We've been told numerous times that HTC is getting back to the Windows Phone market with the HTC One (M8)...