Motorola has been going through quite the change over the past few years, transitioning from producing high-end handsets to taking a more modest approach. 2013’s Moto X was the beginning of something new for Motorola Mobility; finding a balance between a high price point and functionality. While the 2013 Moto X didn’t quite strike that balance, the more affordable Moto G certainly did, selling like hotcakes in countries outside of the U.S. The Moto X however, a device aimed at the U.S. market, didn’t sell as many units as the company had planned.

Motorola’s hoping to change all that with the 2014 version of the Moto X which is bigger, badder and slicker than ever. Did Motorola succeed in this venture or is the 2014 Moto X just more of the same? Read on to find out! 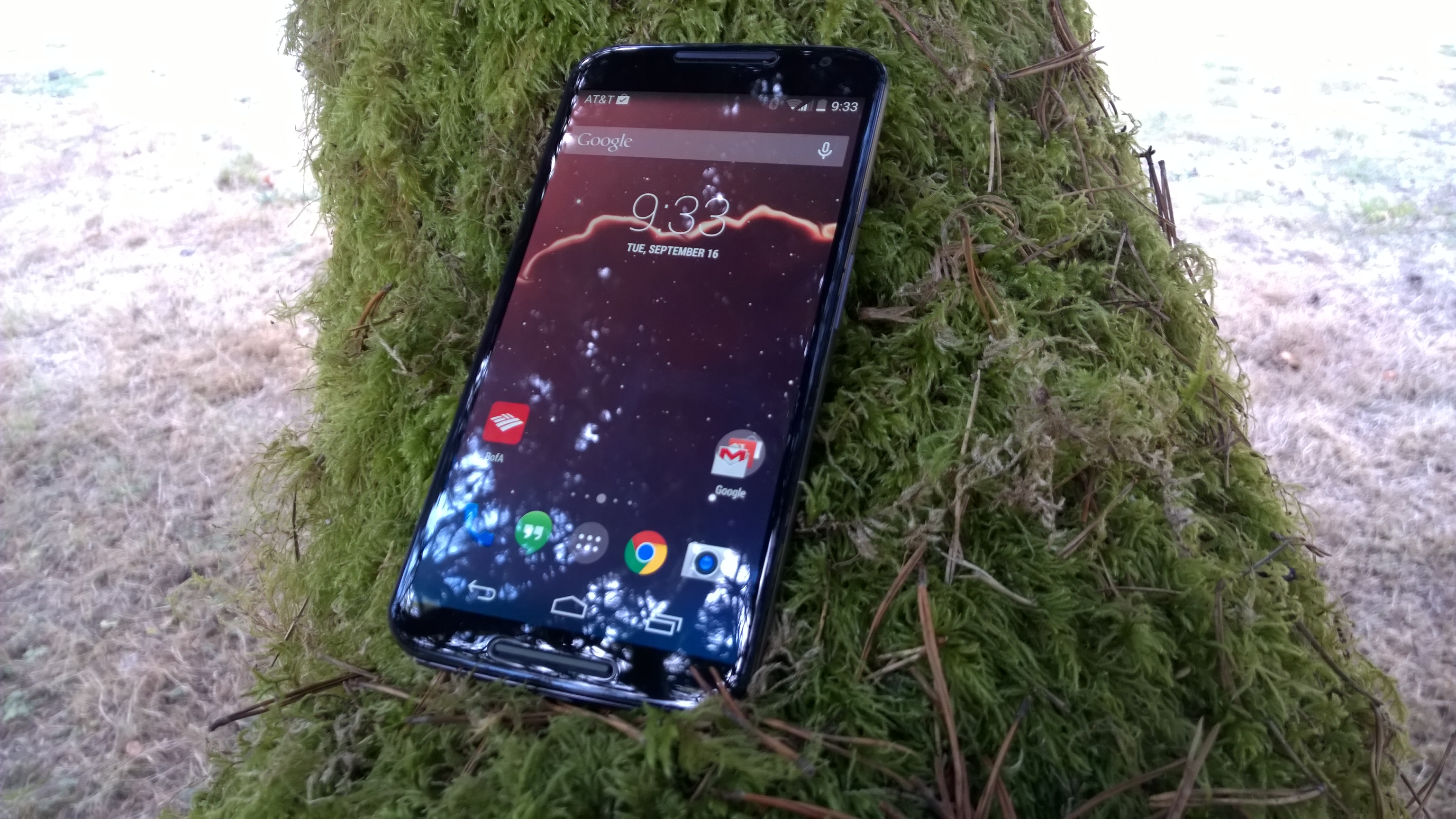 Design wise, the 2014 Moto X is almost identical tot he 2013 model. Sure, the screen is bigger and the bezels seem a little less prominent, but overall the 2014 Moto X continues to perpetuate Motorola’s sleek and simple look. On the front of the device you’ll find a front-facing camera slightly off to the right of the speaker. The speaker and microphone sit opposite each other in perfect symmetry, making the front of the Moto X unobtrusive and inviting. A micro-USB charging port sits in the center of the bottom of the frame, with a power button and volume rocker on the right. Dead center of the top of the frame is where you’ll find a 3.5mm headphone jack with the SIM card slot off to the left.

Like last year’s model of the Moto X, you can customize your device using Moto Maker, an online Moto X customization tool. For the front and side you’ll have the option of white with a silver frame or black with a dark metal frame. For the backside you’ll be able to pick from 25 different color options, including four distinct wood and leather options. As you can see from the pictures, Motorola was nice enough to send me a Moto X with a black front and dark metal frame and a dark leather backside. Pretty slick. 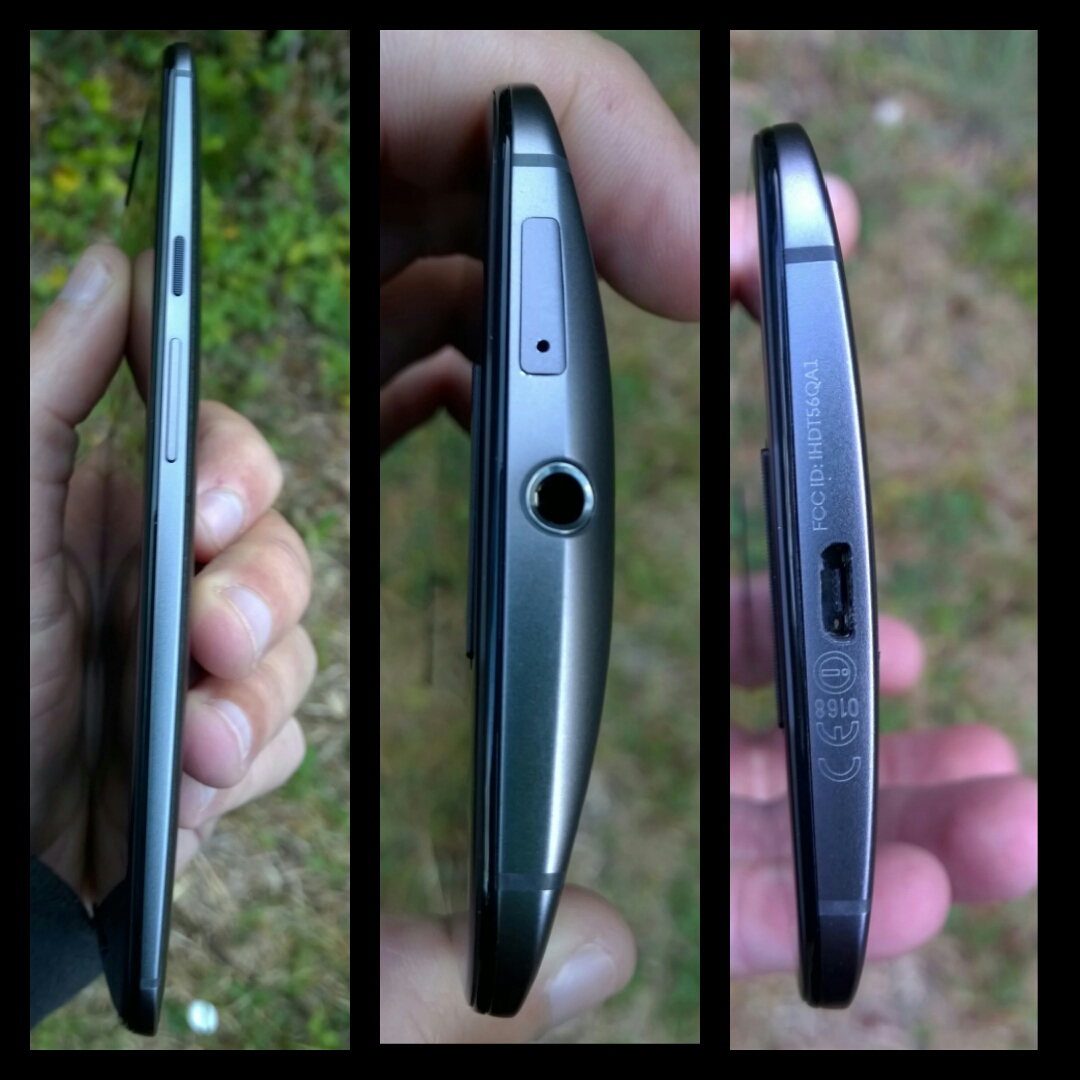 Weighing in at 144 grams, the Moto X feels light in the hand. It’s curved backside makes holding the 5.2 inch screened device a delight, and the leather back affords a bit of traction so you don’t have to worry about it slipping out of your hand. It’s a nice looking device for sure, but lacks a wow factor like the LG G3 and HTC One M8. Next to those models the 2014 Moto X seems downright modest, and that’s not a bad thing. As Motorola has proven time and time before, a smartphone doesn’t need a fancy facade and a huge spec sheet to succeed. It just needs to be clean, unobtrusive and simple. 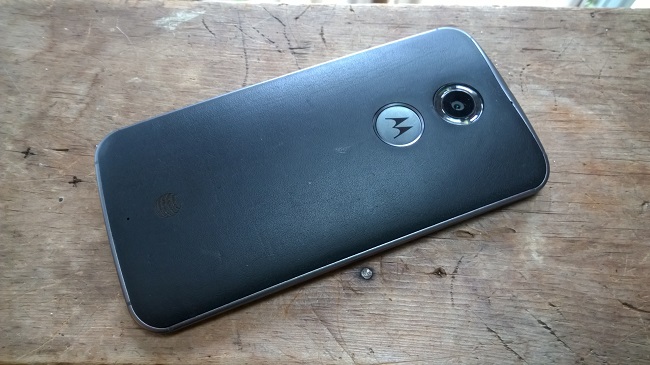 The 2014 Moto X touts a 5.2″ AMOLED 1080p Full HD screen with 423ppi and coated in a layer of Gorilla Glass 3. 2GB of RAM can be found onboard along with 16 or 32GB of internal storage. Android 4.4.4 KitKat runs the show on a Qualcomm Snapdragon 801 processor, with the latest Android updates landing on the device quicker than others. You’ll also find a 13MP rear-facing camera, a 2MP front-facing selfie snapper and a 2300mAh battery. In the age of 3,000mAh and up batteries in flagship smartphones, that 2,300mAh may seem a little paltry; but rest assured, it’s more than enough juice to get you through a solid day of moderate use. 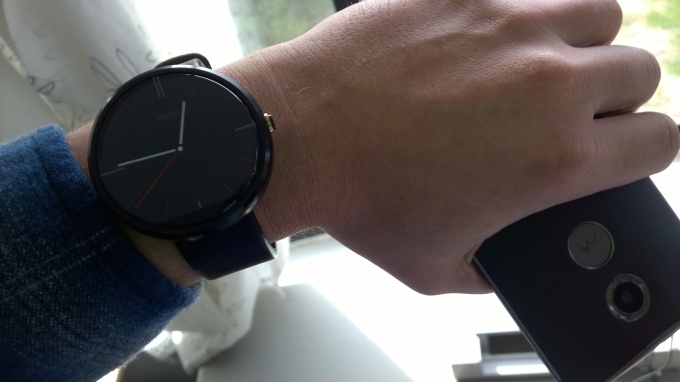 The Moto X’s 13MP camera is a nice upgrade from the 2013 model’s 10MP snapper. It takes clear and crisp photos but does have a little trouble with color balance. The so-called flash ring that surrounds the camera is plenty bright. It’s a passable camera though, especially with the changes Motorola has made tot he camera software. Opening up the camera on the Moto X is simple to say the least, offering no icons if you so desire. Simply tap the screen to take a shot, swipe right to pull out the camera functions menu and left to access the galley. You can even access the camera app by simply twisting your wrist twice, even when the Moto X is locked. Easy enough, right? 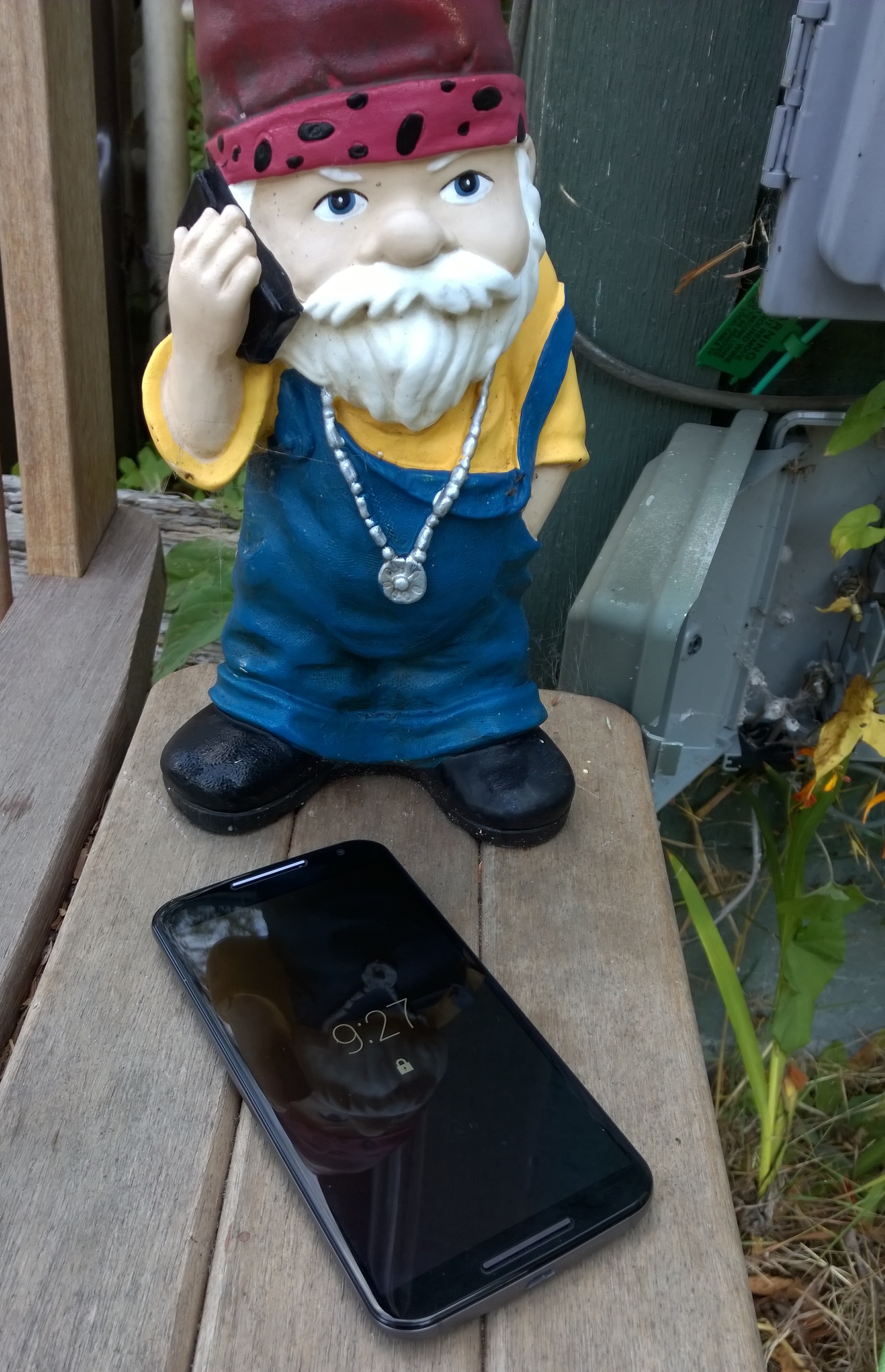 One great thing about the Moto X is that you’ll be getting Android updates with the quickness. Motorola is all about that new Android Lollipop, pledging that the update will roll out as quickly as possible once Google releases the source code. After Motorola approves the Lollipop update it’ll still have to go through the carriers for certification, but still, it’s nice that Motorola makes updates a priority.

The 2014 Moto X sports the same software features found on the 2013 model, which isn’t a bad thing. Moto Display is a quick way to check up on notifications without unlocking your phone, showing small notification icons right under a crisp and clear clock. Thanks to Moto Actions and a few motion sensors you can simply swipe your hand over the Moto X to dismiss a call or bring up your Moto Display notifications. Moto Actions can also be used to snooze your alarm clock for those mornings when you need a little more rest than usual.

Last year, the Moto X’s voice actions or Moto Voice as its now known were the stars of the show. They’re here on the 2014 Moto X as well, but they’re way less impressive than they seemed to be last year. There have been a few improvements, including the ability to customize the wake up voice command so that you’re not always saying the annoying, “OK, Google” phrase. There’s a ton more stuff you can do with Moto Voice, such as posting to Facebook, instantly play a YouTube video and even take a selfie. Some commands worked great, but I couldn’t get the Moto X to post to Facebook or activate sleep mode after the command “goodnight.” All in all its a great experience, but one that can be had on any smartphone these days running the Google Search app. The one caveat here is that the Moto X uses a low powered always on processor just for voice command processing, which affords the Moto X a little more juice to spare when using voice commands.

Motorola Assist is a powerful tool that really showcases the fluidity of Motorola’s software. Assist allows you to customize actions based on certain times of day or location, even while driving in the car. Essentially, you’ll set up your notification preferences based on four categories including sleeping, driving, home and meeting. For instance, you can have your phone go silent automatically during pre-set times, like when you’re in a meeting or during sleeping hours. Assist helps out in the car by automatically connecting to a trusted Bluetooth device, read text messages out loud or instantly play music from the Moto X’s headphone jack. There’s a ton of customization here, and it really does the trick in simplifying our hectic mobile lives.

You’ll also find the less exciting yet valuable Motorola Migrate and Motorola Connect on board the 2014 Moto X. Migrate helps first-time Moto X users transfer all of their data to their new phone and Motorola Connect allows you to keep track of your myriad of accessories and receive call and text notifications in the Chrome browser.

All in all, the Moto X is a decent little device. While it may not be up to par with other Android flagships when it comes to specs or design, but it’s still a beat and packs enough of a punch to whiz through anything you can throw at it. If you are a fan of Motorola you’re going to love the new Moto X without a doubt. Aside from a bigger screen and some beefed up specs, the new Moto X is essentially the same as the 2013 model. That’s not a bad thing; it actually proves that Motorola did some things very right with the 2013 Moto X. If it ain’t broke don’t fix it, right?

The Moto X is currently available for $100 with a new two-year contract from AT&T or Verizon or $499.99 outright.

Another day, another Sony Xperia Z4 rumor. This time round, we (think we) have the entire specs sheet to share....