There are many note-taking apps and services out there and there’s Evernote. It’s by far the single best such app/service launched to date, the fact that earned it a place in New York Times’ “Top 10 Must-Have App” list and even the Webbys award. The reason for its popularity is simple – it’s easy to use and it works across platforms, allowing users to access and manage their notes from their phone, PC or web. Moreover, it’s not just about text – Evernote can handle images, video as well as various types of documents; while at the same time allowing for tagging and organization of content across multiple notebooks.

People use Evernote for different kind of notes. You can store business cards and wine labels in Evernote and easily find them later on. The software on Evernote's servers detects the text on images, making images indexable and the text on them - searchable.

Evernote can be used in a number of ways: 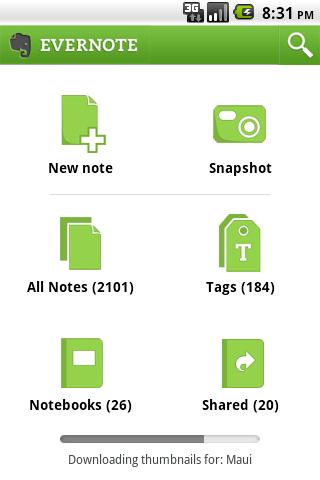 Evernote is the mother of all note taking services. It's a note-taking service done right - easy to use while at the same time bringing powerful features to the mix.

Evernote is free to use, though there's also a Premium subscription which is available for $5 a month or $45 a year. It's worth every penny, offering 1GB of monthly uploads, along with the ability to add, sync, access and share files (PDF, Word, Excel, PowerPoint and more). Moreover, accessing and modifying shared notebooks from a mobile phone is also a Premium feature, only.

Damn right I recommend it. And I'm not the only one - Evernote for Android and Evernote for iOS both have 4.5 out of 5 stars rating. At the moment of this writing, more than 10 million people have registered for Evernote. The numbers say it all...