If you’re looking for a bad ass 4G LTE handset on Verizon and the Motorola RAZR and Samsung Galaxy Nexus aren’t quite your cup of tea, the HTC Rezound is probably your first choice. While it’s oozing with high-end specs and hardware that could only come from HTC, the Rezound has a lot of competition standing in its way to become the go-to Verizon LTE phone. In this review we’ll go over the good, the bad, and the in betweens to help you figure out if the Rezound is the right LTE phone for you this year.

Verizon's three LTE phones that will be vying for your attention this year are the Motorola RAZR, Galaxy Nexus, and of course, the HTC Rezound. All sport similar specs but each have something unique enough to distinguish them. The Rezound hits the sweet spot in a couple of different areas that subtly outshine the other handsets but to be crowned the LTE king this year, it needs to bring the fight.

One of the Rezound's standout features is Beats audio support. While this would never really sell us on buying a phone, you'll at least know that you're getting some quality sound with the Rezound. It's after seeing the handset's display that you figure out that Beats support is definitely not the highlight of the handset.

The HD display on the Rezound is stunning. This is mostly highlighted when viewing pictures on the screen, as they really pop out at you in ways we have yet to see on a handset before. We'll have to put the Rezound and Galaxy Nexus side by side to see whether the standard SLCD will best the HD Super AMOLED when the time comes.

The face of the Rezound dominated by the 4.3 inch 1280 x 800 display, which is accompanied by the four standard Android buttons for home, search, back, and menu. HTC has made the translucent buttons red instead of the standard white that we're used to seeing on Android phones today and it's quite a nice touch. We're not sure if it would have been more sublte to just go with an actual red LED light but the red plastic gets the job done. (why do we not see this more often?)

Above the display, you'll find the standard red-accented earpiece, proximity and ambient light sensors, 2 megapixel camera for video chat, and Verizon logo sitting underneath the bunch.

Internally, the Rezound is a beast of a phone. Shipping with a 1.5 GHz dual-core Qualcomm MSM8660 processor, 1GB of RAM, 16GB of internal memory with a 16GB micro SD card preinstalled. When putting the Rezound against the RAZR or Galaxy Nexus on paper, the battle seems to lean in favor of HTC's offering, especially in the processoring power area. That said, after seeing what the CPU spec bump did for the T-Mobile Galaxy S II, I'd stick with a 1.2GHz CPU any day. There's a battery tradeoff with that .3 MHz and it's not worth it when you're working with an LTE device.

Still, the Rezound is an exceptionally snappy device. However, mix between the display, CPU, and data speeds make this a powersucker and it's something you're going to have to live with in the Rezound world. That said, it fares very well. 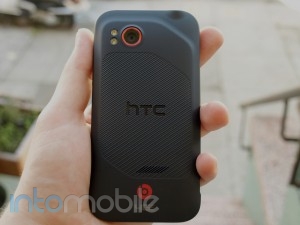 For the audiophiles out there, the Beats support may be the reason to get this phone. Overall, the sound quality is pretty spectacular that brings great bass throughout without any distortion whatsoever. That said, we hated the actual earbuds that come with the phone. Sure, there are quite a few different sizes to adjust the in-ear fit but too many times did it feel as if our ears were being prodded a little too much. You really need a perfect fit to get a sense of how great Beats is and it was a struggle for us. 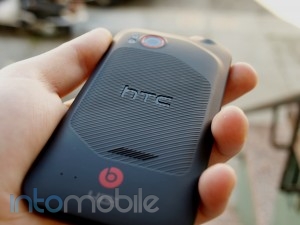 The design of the Rezound actually isn't all that special but only because it's essentially a repackaged HTC handset that we've already seen before. It looks like a hybrid between the Thunderbolt and Incredible 2, which definitely isn't anything to scoff at but some may easily be wooed by the Droid RAZR's ultra-thin design and the Galaxy Nexus' large and curved display.

The Rezound's design also attempts to trick your eyes. It's actually a pretty thick handset but the thinner edges surrounding the device make it seem a bit thinner than it is. The in-hand feel is pretty solid, even if we're not fans of the textured battery cover.

HTC borrowed heavily from the past Droid Incredible handsets with the Rezound, and while we were craving something a little more unique with the design, it's still a very nice looking handset. 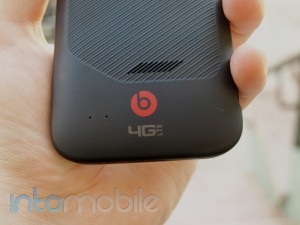 The build quality may seem a bit questionable when you first hold the Rezound but most of those concerns will fade as you use the handset. It's just as solid as any other HTC phone.

The battery cover is a bit of a turn off for us but it still provides an excellent grip and is easy to get accustomed to. Plus, given that the handset is on the bulkier side, having a more solid, metal back piece would likely add too much heft to the handset. Overall, the phone is just about as solid as you'd expect from any HTC handset - pretty awesome. 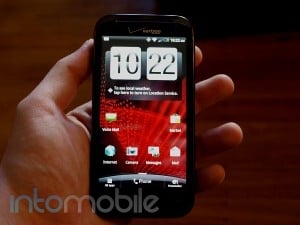 The Rezound ships with HTC Sense 3.5 and is filled with great features and tweaks you won't find anywhere else on Android phones today. Sense has come a long way and while it's beautiful, it's very heavy on animations and at some points it could be considered overkill.

Just like every other version preceding it, Sense offers up 7 homescreens to customize with applications and widgets. Revealing all of the home panels is as simple as pressing the home button twice or pinching the screen. Swiping between the panels will reveal a carousal-like animation that really doesn't do much but add in some eye candy.

Most core applications within Sense have been heavily customized, which can be a good an a bad thing. Core Google applications are not open-sourced, so HTC has created its own in some areas. This means that even if you don't use one, it will always be there and you can't remove it. This happens most often when trying to share content from the device.

For instance, Sense has it's own social sharing app called Friend Stream, which aggregates your social networks together. If you want to share a picture on Facebook (the official app is also installed) you'll be presented with multiple ways to share to the same social network (Facebook and Facebook for HTC Sense). This isn't a deal breaker but it does make way for a more cluttered look.

Don't get me wrong, Sense isn't a bad custom UI in any way. While we have grown accustom to other, less-heavily skinned custom UIs from other manufacturers, Sense provides a polish that you just won't find anywhere else.

Shipping with Android 2.3.4, the Rezound will eventually get the Ice Cream Sandwich bump at some point early next year. Still, we wonder just how much you'll be able to notice the new version with the many HTC customizations running on top. 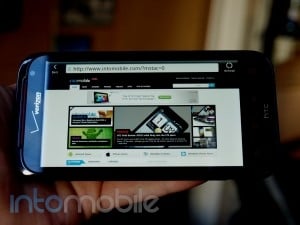 We've always enjoyed what HTC has done with the web browser on its phones, even if it's very minimal. This is also where the gorgeous display shines. Colors pop and text is still very clear when the page is zoomed all the way out.

HTC has simplified navigation within the browser and now has a dedicated back soft button to the left of the address bar. To the right is where you'll find the reload/stop soft button, and all other options are tucked into the menu settings. Other than that, this is essentially the same web browser we've seen before on any other HTC Sense device and that's definitely not a bad thing.

As you'd expect, the Rezound isn't in short supply of multimedia options. From HTC Watch to VCAST Music, there are a few outlets to purchase music and movies from. Since the Rezound is DLNA certified, you can easily share content to and from your device to a compatible HDTV and other devices with just a few clicks.

Of course, you'll also have Beats support when listening to your tunes. While it may not be the best selling feature of the Rezound, it's hard not to see the benefits of the 300 million dollar investment. 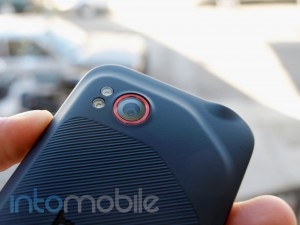 Just like some of HTC's latest handsets, the Rezound sports a very high-end 8 megapixel camera with dual-LED flash. We've seen just how great the myTouch 4G Slide and Amaze 4G cameras perform, so we knew just what to expect this time around.

There were a couple of pictures that were hard to call bad but lacked a crispness that we've seen on other comparable HTC phones before. Nonetheless, the Rezound's camera is easily one of the better shooters we've seen on a phone in a while. The camera software offers up some slick effects and filters you can apply very easily.

One thing we did notice when using the camera is that sometime the HD display had trouble keeping up with the viewfinder when in the camera. Constantly shifting that many pixels in the viewfinder proved to be somewhat hard for the phone but it didn't affect the quality of the picture. 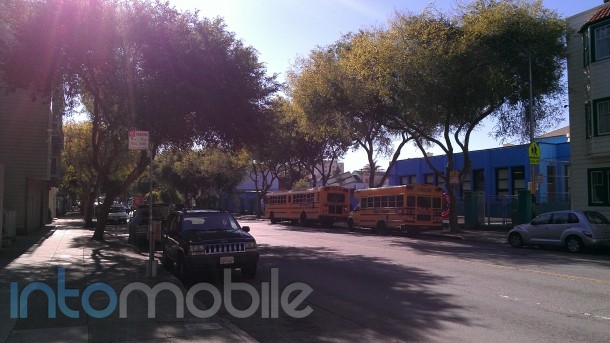 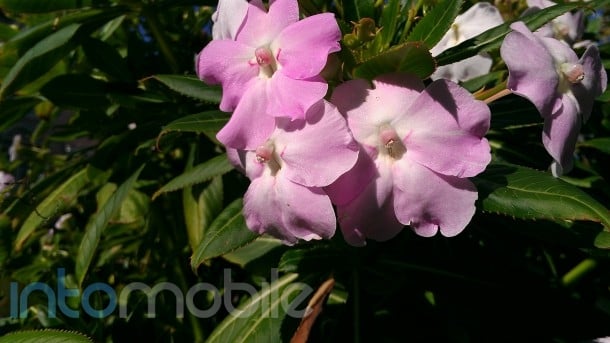 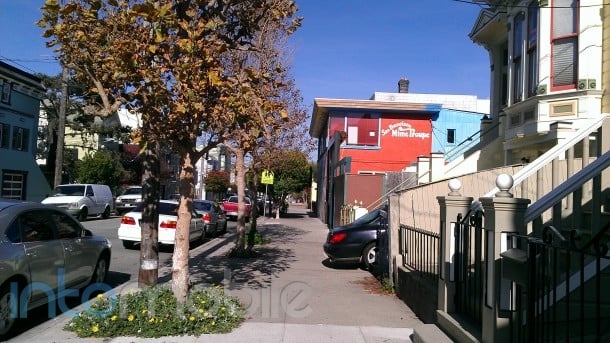 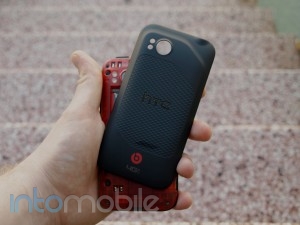 Call quality was pretty top notch in our experience with the Rezound. We were a little too occupied by the gorgeous display on the Rezound to make us want to put it to our ears for a call but when we did, the quality was clear as day.

Battery life with the Rezound is just about what you'd expect from a LTE phone today: pretty poor. Still, there were some days that the Rezound surprised me with the amount of juice it had left but as with most things, your experience will likely vary. For a LTE phone, the battery life was pretty darn decent. 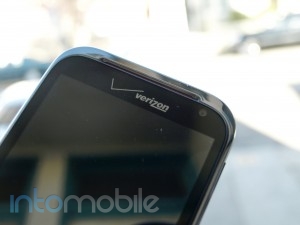 There's a lot to like about the Rezound: Beautiful screen, awesome audio, and other top-notch internals that will make the geekiest of geeks swoon. Still, with the exception of the spec swap, this is like every other HTC Sense device. Sure, it's probably the best to date but as a whole, HTC handsets bore the crap out of me.

That said, this handset will easily impress pretty much anyone who picks it up. The display is really something you need to experience for yourself and the dual-core CPU is very fast. Add in Verizon's blazing fast 4G/LTE and we have one hell of a phone on our hands.

The Rezound is a bit on the chunkier side and the design is almost an exact replicate of the previous Droid Incredible models. Neither of things things should be surprising when it comes to a brand-new, top-notch, HTC handset but one should definitely handle the device before pulling the trigger, especially when competing phones have much nicer designs.

Overall, the Rezound has a lot going for it. It may lack a stark design found on the Droid RAZR and the latest version of Android found on the Galaxy Nexus but the Rezound gets a lot right. The HTC Rezound can easily compete with the likes of the Droid RAZR and Galaxy Nexus and it really just depends on personal preference when choosing between the big three. Either way, it's a great time to be a Verizon Wireless customer.