The Samsung Stratosphere for Verizon is the carrier’s first 4G LTE phone with a full, physical slide-out keyboard and in this review, we’ll determine if this Samsung smartphone can keep up with the flood of awesome 4G LTE coming to the market. Read on to see how it stacks up to the competition.

The Samsung Stratosphere reminds me of the Samsung Droid Charge but a bit more bloated, as it had to make room for that full, slide-out QWERTY keyboard. There's nothing wrong with the design at all but it really feels quite mundane, especially when you consider that devices like the Droid Razr are pushing the boundaries of what is possible with these high-end devices. Still, the Samsung Stratosphere is well-constructed, feels nice in your hand and it sports a nice screen and enough hardware to satisfy many users.

The Samsung Stratosphere looks nearly exactly as you would expect a touchscreen device with a horizontal, slide-out QWERTY keyboard and it looks good but it definitely won't be turning any heads. It's a bit on the thicker side but that's the price you pay for having that keyboard on there. Luckily, it's not too heavy and the balance when the keyboard is exposed is really nice and comfortable. The soft plastic backing feels nice to the touch and you can rip that battery cover off, bend it nearly in half and it will pop back to its original form without being worse for wear.

The 4-inch Super AMOLED screen takes up much of the face and while it's not as beautiful and crisp as something like the Retina Display or the Super AMOLED Plus screens, it's responsive, bright and colors look bold and beautiful. The Verizon logo and earpiece are on top of the screen and the Samsung branding and the four standard Android capacitive buttons are below the screen.

The right spine is clean except for the power/unlock button on the top half and the standard headphone jack rests on the top. The left spine has the volume rocker and the bottom has a microphone hole and the microUSB port. The back cover has that nice, soft plastic finish, a 5-megapixel camera with an LED flash and the logos for Samsung, Verizon and 4G LTE. It's pretty standard stuff, as all the buttons work as you would expect and the device is well-made. Still, it's a phone that you know Samsung could put out in its sleep and there's nothing really stand-out about the industrial design.

We live in an interesting time when a 1 GHz processor can be considered middle-of-the-road but that's exactly what we're dealing with here on the Samsung Stratosphere. While it doesn't pack the horsepower of some of the upper-tier devices, the processor was more than capable of providing a good experience: apps launched quickly, games played well and I noticed very little sluggishness overall. You also have all the other features you'd expect in a device like this including GPS, Bluetooth and the ability to fall back to 3G if you're not in a 4G LTE coverage area. 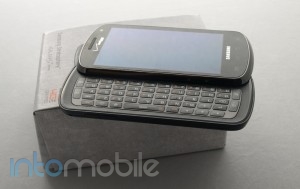 Of course, the main appeal of the Samsung Stratosphere is its physical, slide-out keyboard and Samsung has done a solid job with this. The slide-out mechanism is excellent, it provides a comfortable snapping sound and you can just tell that it will last a long time. There's also a wonderful weight balance to the phone when the keyboard is out in the open, as it's very comfortable to hold the device with the keyboard out and type while on the move.

The keyboard is laid out in a spacious manner, as we appreciate the dedicated number row and there's ample space between the keys. The keys feel good against your thumbs and we dig that the keys are lit up so i's easy to see what you're typing in the dark. The keys are laid out in a semi-half circle and the Android buttons are put on each edge with large keys. It's a solid keyboard but I would have liked the keys to be raised a little bit for some more travel back. You don't have to use the physical keyboard to input text, as it comes with Swype preloaded and you can change that to the standard Android keyboard, the Samsung one or just download something from the Android Market. 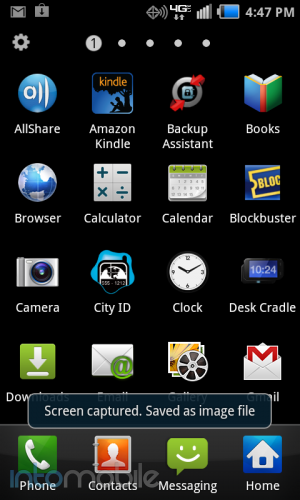 As I've mentioned on all the Android phones I've use lately, if you've yet to try out the platform, you should know that it is a good operating system for browsing the web, making and receiving phones calls, is highly capable of messaging and there are a plethora of apps available. Some may say it's not as polished as iOS but users are able to customize Android to their needs far more than the iPhone.

The Samsung Stratosphere comes with Android 2.3.5 Gingerbread and the TouchWiz custom user interface from Samsung. Some of us don't like the custom UIs but I'm always willing to give them a chance because it can sometimes deliver a better experience than standard Android. While I'm not happy about what TouchWiz will mean for speeds of updates, I find it to be a pleasant way to experience Android that should resonate with most consumers.

The TouchWiz UI kind of looks like iOS, so much so that Apple is suing Samsung over it. We'll let the lawyers decide that one but I find it to be a bright, cheery aesthetic, as there's a sense of cheeriness built throughout the UI. Whether it's the big, bright icons, or enhanced notification window, TouchWiz has always struck me as an elegant way to use Android. If you're really hardcore about having stock Android, this one probably isn't for you but you could always root it.

The Samsung Stratosphere comes preloaded with the usual range of Verizon apps including the V Cast stores for music, videos, media and ringtones and you football fans will be happy to know that the NFL Mobile app is preloaded and works well. Also, look for things like Slacker and Amazon Kindle out of the box. I find it aggravating that you can't fully uninstall some of these apps but most are actually pretty useful.

Android 4.0 Ice Cream Sandwich is just right around the corner and it has multiple new features which should benefit the Stratosphere once an update hits. Unfortunately, I don't think this will be the priority handset to get it, so you may have to wait a while to get it on this phone. 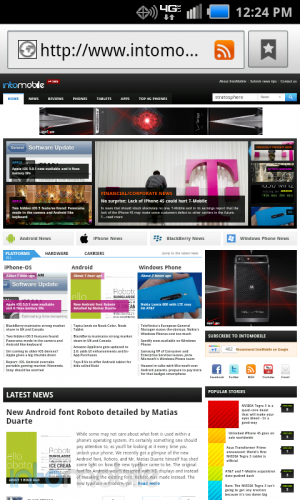 The Samsung Stratosphere uses the standard Android WebKit browser with a few TouchWiz modifications and it's a great way to browse the web on the go. The browser can handle most sites you through at it, eats through HTML5 and JavaScript without a problem and it can handle intelligent zooming and text formatting easily. One neat little feature I like is that you can use a pinching motion to bring up all of your open windows - it's a small feature but one that comes in handy for me because I generally have a ton of windows open. Combine the good browser with the excellent 4G LTE and you have an above-average mobile browsing experience.

I'm still of the belief that the lack of an iTunes-like system puts Android phones at a slight disadvantage compared to the iPhone because there's not one unifying multimedia engine but the rise of streaming apps is making me start to question that. The Samsung Stratosphere isn't quite as good as an iPhone when it comes to music and video but it's pretty darn close.

The 4-inch Super AMOLED screen does provide a good mobile video experience, as colors pop on the screen and it's enough real estate to actually watch more than just a short YouTube clip on comfortably. The Samsung Media Hub provides a store for many movies and TV shows and I found the buying or renting experience to be pretty smooth. The same can be said for the V Cast Media store but it's still kind of a pain to have your videos locked up in these systems. I'd just download the Netflix app and sideload other videos for my needs.

The music experience can be pretty good, provided you have the right apps. The standard music player is fine and buying music from V Cast is quick and easy but with apps like Spotify, Stitcher, Pandora, Slacker and others, having nearly any song or podcast at your fingertips is just an app download away. I also have my Google Music account set up and cache songs to my device, so even the offline experience works well. Sideloading content can be achieved through Verizon software or just by dragging and dropping.

I didn't really dig the speaker, as I found it would get a little distorted at the higher volumes and the bass was weak. Plugging in headphones was perfectly fine though.

Maybe I'm spoiled with the new crop of amazing camera phones out there but I couldn't help but feel disappointed with the quality of shots on the Samsung Stratosphere. The 5-megapixel camera produced decent-looking shots that hold up when they're blown up but I wanted better true-to-life colors and more details.

The delay between hitting the on-screen shutter button and it actually taking the picture is pretty annoying too but there was a quick shot-to-shot time and multiple options and effects, as you'll see below. The camera software is simple to use and the front-facing camera is more than enough to do things like Tango video chatting but don't expect amazing shots out of it. As  always, low-light shooting can be a pain and I found the flash a bit overwhelming. 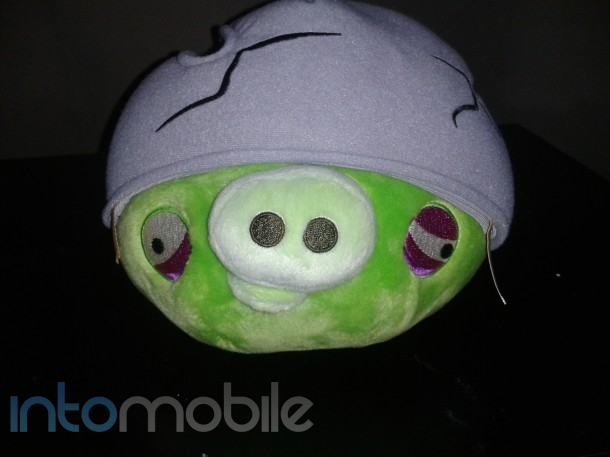 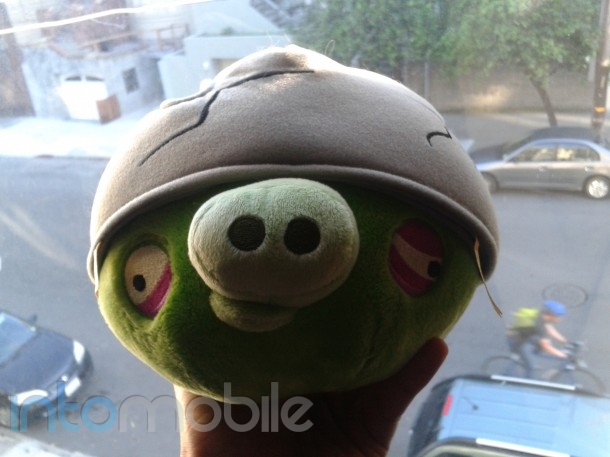 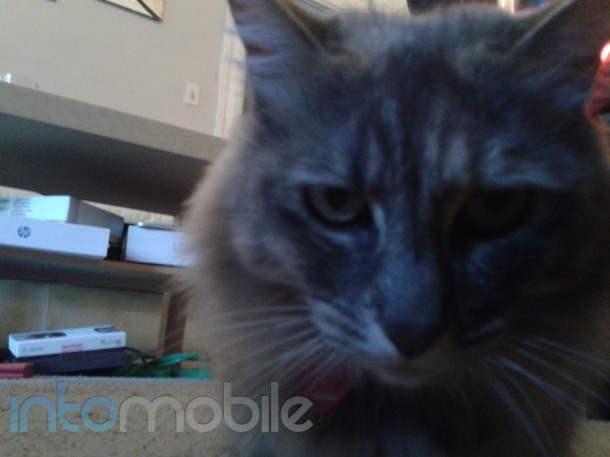 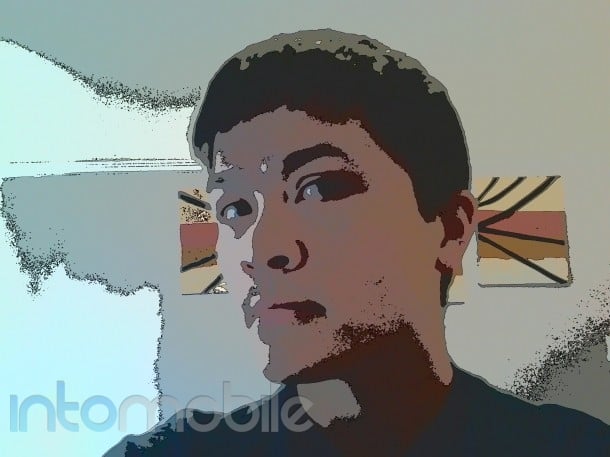 While this phone can only do 720p HD video and others are rocking 1080p HD, I found the videos on the Stratosphere to be quite good. The playback is smooth and the audio pickup was solid. Check it out below and let us know what you think. 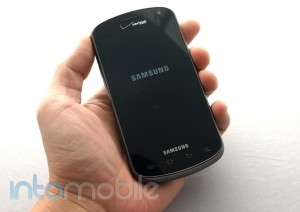 The Samsung Stratosphere provided good call quality during my testing time in and around the San Francisco Bay Area, as calls came through loud and clear with very little distortion. The only complaints I heard from callers was that my end sounded a little muffled but that only happened when I was using Google Voice, as calls directly from the device were good. As with the music, I was a bit disappointed with the speaker phone quality but it wasn't awful.

For a 4G LTE phone, the Samsung Stratosphere had some solid battery life, as I was able to get through a full day on a single charge while using heavy web browsing, streaming audio and using location-based services. The charging speed was also pretty fast. 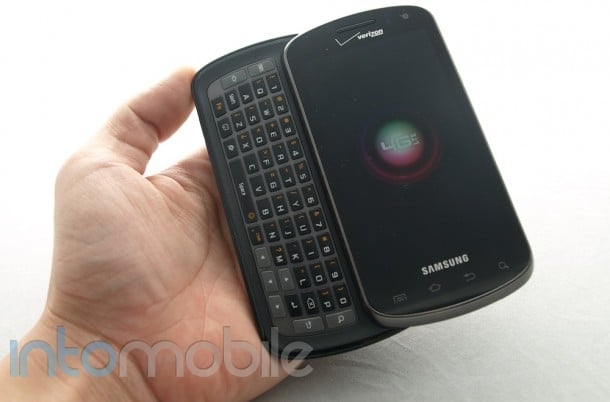 The Samsung Stratosphere isn't the most exciting 4G LTE phone, as those wanting cutting-edge hardware, design and fabulous cameras will probably be happier with the Droid Razr, HTC Rezound or the Samsung Galaxy Nexus but the device will please those who absolutely must have a physical QWERTY keyboard. The  disappointing keyboard and rather mundane design make it difficult for me to get very excited about the Samsung Stratosphere.

With that said, if you want a 4G LTE phone with a keyboard, this is the only game in town. It also provides an amazing 4G LTE experience and TouchWiz is a pleasant way to experience Android. I'm not clever enough to make a cloud joke, so I'll conclude this by saying that the Stratosphere is a solid 4G LTE Android phone that should satisfy those who want a physical keyboard. 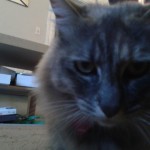 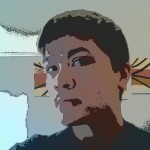 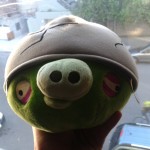 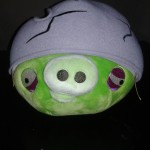 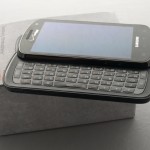 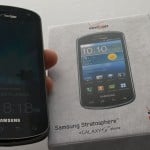 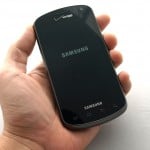 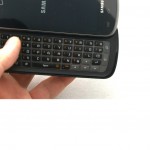 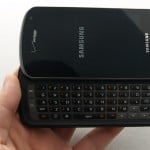 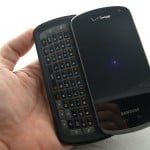 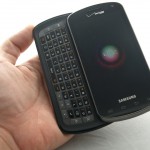 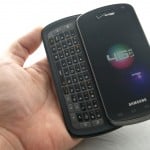 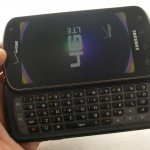 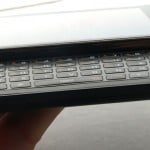 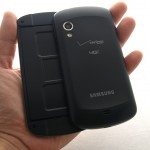 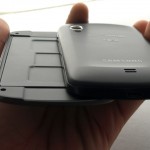 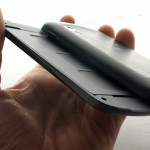 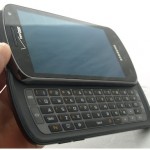 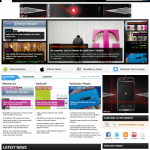 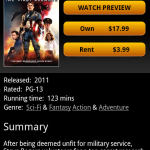 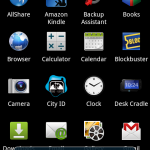