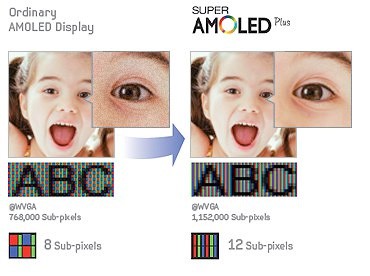 When Google, technically HTC, shipped the Nexus One, many were blown away by the rich blacks and crisp text that the AMOLED screen it came with offered, but something just wasn’t right. A little investigation using a common everyday microscope revealed that the AMOLED display in question didn’t have equally sized of red, green and blue (RGB) pixels. Using something called a “PenTile” configuration, something invented by Samsung, green pixels are noticeably shrunk down in size because the human eye can more easily tell green apart from other colors. Make the pixels smaller and they’re easier to produce, cheaper, and most people don’t even notice the difference. Samsung, looking to blow people’s minds and make customers happy, will soon start shipping devices with Super AMOLED Plus screens. They have 50% more subpixels (RGB pixels) and will properly display your images, web pages, and videos without any PenTile trickery. Let’s not forget the amazing performance in sunlight, as well as the viewing angles, and we’re left with the opinion that our next mobile device will most certainly feature this display.

The only devices that have been announced to house a Super AMOLED Plus screen are the Samsung Galaxy II S and the Samsung Infuse 4G for AT&T. The former has a 4.3 inch screen while the latter is a monstrous 4.5 inches. Unlike that first AMOLED in the Nexus One that measured 3.7 inches across, the extra subpixels that give you better performance mean that more space is required to get the same 800 x 480 pixel resolution that we’ve all become used to in Android Land. It’s a bit of a shame that we have to sacrifice portability for image quality, but there’s no doubt in our minds that Samsung is working on making smaller versions of their latest AMOLED technology for those of us who don’t want to carry a gigantic black rectangle in our pockets.