Wearable technology is quite the hot topic these days, and people will soon begin to have quite a few options to choose from. The first piece of wearable tech that will likely become the first widely accepted device is the smartwatch. (If we exclude the pager, or, you know, real watches.)

Smartwatches will likely be a novelty item for a while, as many cost the as much as a premium 7 or 8 inch tablet today. The upcoming Qualcomm Toq is priced at $349, which is a bit hard to swallow for such a small piece of technology. That said, Sony’s latest offering keeps the price down relatively low and ships with features that people would expect such a device to have this early in the game.

Sony was one of the first to bring a smartwatch device to the table a few years ago. The device was simple and was ultimately held back by many factors, but Sony was testing the waters for a market that would soon begin to become “the next big thing,” and getting developers interested in their device during the process. Now it’s back with the Smartwatch 2 that offers up a handful of improvements from its predecessor.

Can the Sony Smartwatch 2 compete with the likes of the Samsung Galaxy Gear, Pebble, and the upcoming onslaught of smartwatches? In this review, we’ll see if Sony’s latest smartwatch has what it takes to be the next (or first) watch on your wrist.

The Smartwatch 2 ships with a 1.6 inch transflective LCD display with a resolution of 220x176. The transflective display allow you to view to the time on the watch while the backlight is off, which is a huge plus, given that this is a watch first and foremost. Other specs on the Smartwatchs 2 include Bluetooth 3.0 and NFC, and we'll touch on those later in the review. 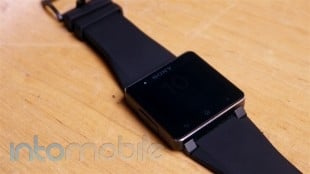 Unlike the Galaxy Gear, all of the guts inside the Smartwatch 2 live inside the actual body of the device, as the wristband is just plain silicone, unless you opt for the steel option. This isn't a bad thing in anyway, since you can replace the wristband with any standard 24mm wrist strap of your choosing. Of course, Sony has it's very own wrist strap options to choose from in a variety of colors. The silicon wrist straps come in black, turquoise, pink, purple, and yellow, with two leather straps available in black and light brown.

As you'd expect, the Smartwatch 2 doesn't have many buttons. Like many of Sony's newer smartphones, the Smartwatch 2 also shares the same large, aluminum power/lock button on the right side, along with three capacivtive buttons below the display for back, home, and menu. Tucked away and hidden on the left side is where you'll find a small latch for the microUSB port for charging.

It looks like Sony was really going for functionality and practicality when making the Smartwatch 2. Water and dust resistance, along with the ability to change wrist straps are hardly epic features in any sense, but they exist for a real reason and not to just throw a feature in. 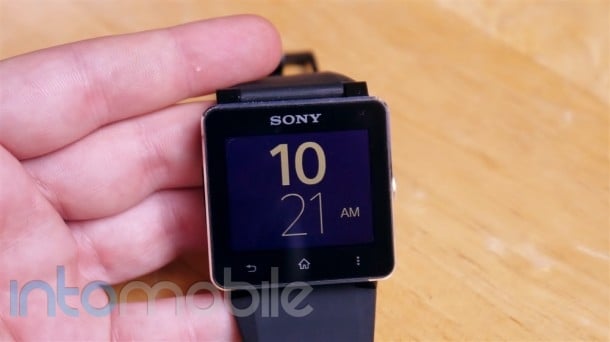 Sony put as much of its Omnibalance design in the Smartwatch 2 as it could, and it works well. The overall design is simple and to the point, but at the end of the day it's just a small square, which isn't a bad thing at all.

Out of the box, the Smartwatch 2 keep the look pretty classic with the black silicone strap, but you can glam it up a bit with your choice of wrist straps. The ability to do this alone helps the Smartwatch 2 standout against the rest. Given the camera built into the strap of the Galaxy Gear, this just isn't an option, giving Sony's offering a leg up. 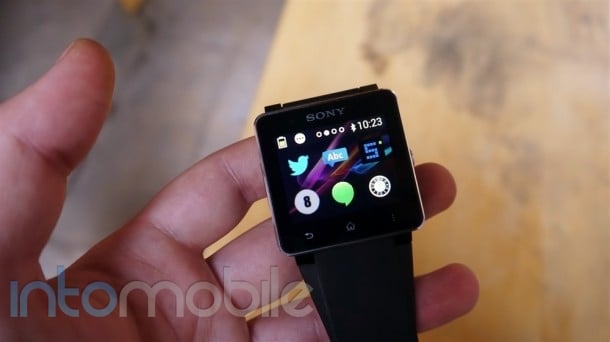 The software found on the Smartwatch 2 has its good and bad points, but overall gets the job done in a very easy to use software experience.

Setting up the Smartwatch 2 couldn't be easier. NFC makes the Bluetooth connection between the smartwatch and your smartphone as easier than ever. On initial startup, you'll be asked to tap your NFC-enabled smartphone together, which will send you a link to download the Smartwatch 2 application. From there, you run the application and you're off.

When it comes to applications, you'll find that there are quite a few at your disposal. You can filter applictions through the Smartwatch 2 application for optimized applications or other applications that were previously developed for the first Sony Smartwatch. Nonetheless, given what you'll likely find yourself using this piece of kit for, you have enough options to be satisfied, with more applications on the way.

Installed applications automatically pop up on the smartwatch when they have been installed through the phone. Settings for these smartwatch applications are also kept on the phone. This not only keeps you from needing to log into Facebook on a 1.6 inch display, but all applications will remain intact if it needs to be wiped.

Why would the Smartwatch need to be wiped? For starters, the software can be pretty buggy at times. Phantom vibrations and devices freezes happen from time to time, which may require you to wipe the device. That said, given that the smartwatch applications live on your accompanying phone, this is less of an issue. Still, the software could certainly use a few tweaks, and Sony is looking to send an update to the Smartwatch 2 in the very new future with stability improvements as well as a few new, unnannoucned features along with it.

The software user interface is simple and intuitive. A 2x3 application grid for applications span each panel, which can be a bit of a pain if you've installed a healthy amount of apps for the accessory. Luckily, you can sort your applications aphabetically or by most used. Notifications can be found in the standard Android method of swiping down from the top of the screen, but there's also an 'events' icon that offers up the same functionality.

Notifications could be handled better, as the only way to dismiss them are to swipe through all of them individually. This can be a bit of a pain. If Sony implemented the swipe to dismiss feature found on Android phones today, it would significantly improve the experience and we wouldn't be surprised if that idea isn't on the table for a forthcoming update.

As far as customization with the Smartwatch 2's software goes, there isn't a lot to speak of. You can change the watchface and notification style but that's about it. Then again, the applications are really what you're getting this companion device for, but we can also expect Sony continue updating the Smartwatch 2's software through its lifespan.

You'd probably be surprised to see what kind of applications can be installed on the Smartwatch 2. Not all are groundbreaking, that's for sure, but it was pretty fun to play Simon or Snake on my wrist. Of course, there are many more applications available for the device. There are almost 200 Smartwatch 2 'Optimized" applications alone, and even more if you select the "works with Smartwatch 2" option.

Facebook, Twitter, Google Hangouts, messaging, are all present here, ensuring that all your forms of communication can be accessed from the smartwatch. Hell, there's even an Ingress portal timer.

Some applications allow you to control your smartphone without needing to pick it up. Smart toggles, camera shutter, and music applications are pretty nifty, and applications like Runtastic can help you keep track of your exercise and calorie burn.

One thing that is going to make a lot of people happy is that the Smartwatch 2 is compatible with any Android device running 4.0 Ice Cream Sandwich or higher, unlike the Galaxy Gear. Giving a smartwatch a premium price and leaving compatibility confined to just a handful of devices isn't a very good idea if you ask us -- even if you're a company that essentially owns the OS.

Sony claims the Smartwatch 2 can get up to seven full days with light use, and from our testing, it came pretty close. With moderate usage, it also stays pretty true to the expected 3-4 days use as well. However, while we put the Smartwatch 2 through its paces with a ton of applications, we mainly used the device to check text messages, so battery life may vary for some.

The Sony Smartwatch 2 is a nice smartwatch offering that comes in at a great price if you're looking for such a companion device. It might lack features like a camera, wireless charging and more, but it does offer water and dust resistance, which might be considered more important to some. And from a practical standpoint, they are.

The software on the device is simple and straightforward, and offers up a wealth of applications to make the smartwatch work for you. From excercise and fitness to text messaging and social networks, there's a good chunk of options available.

The software still needs a bit of work but Sony is definitely smart to keep the UI clean and intuitive, not over the top. I could only imagine that this is because the Smartwatch 2 doesn't attempt to be anything it's not. It's a smartwatch, and while the exact definition of such a device has yet to be truly defined yet, Sony's offering is simply an extension of your smartphone with a few other tricks along for the ride.

Sony's Smartwatch 2 isn't perfect, but if I were in the market for a companion device that'll live on my wrist, it's price point would put it at the top of my list. That said, the smartwatch market is still terribly immature and it's going to take a while for the average consumer to have a device like this on their must-have list.