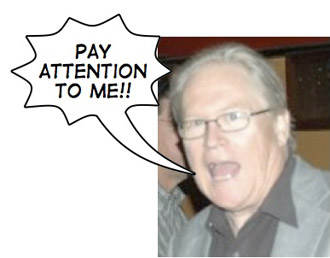 What’s the best way to get more traffic on your blog? Well, make sensational, half-baked, and emotionally controversial comments about an admittedly over-hyped product – which is exactly what John C. Dvorak is good at. The tech-columnist has been mouthing off about the iPhone being crap for as long as we can remember (our long-term memory is shot) – so it’s no surprise to find that Dvorak is at it again. This time around, he’s attacking the media for talking so damned much about the iPhone. We guess he’s done posting bogus (and sometimes contradictory)”reports” on iPhone battery performance, why Apple should ditch the iPhone, and iPhone manufacturing troubles.

Apparently, Johnny-boy is done with all the iPhone fan-boys out there. Aside from claiming that Hitler’s ability to whip up a frenzied mass of people was nothing compared to the Apple iPhone’s hype, he has “verboten” his blog writers from mentioning the iPhone until the actual launch – so that might explain why he’s actually talking about the iPhone on PCMag.com.

Come on, John, just deal with it. People like new and flashy gizmos that they can play with and show off to their friends – we’re all just big kids after all.

We already told you about the mainstream "iPlans" that Apple and AT&T are getting ready to offer all those eager...