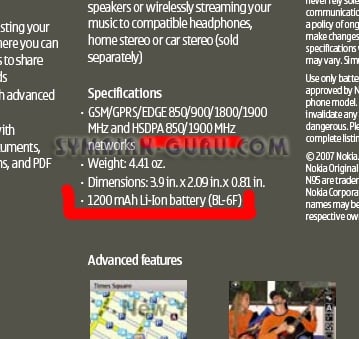 Less than a day after Dusan brought us news that GigaOm met up with the CEO of Sling Media to demo a N95 working on the America 3G network, the official sales flyer leaks out. It is still a quadband phone, but the 3G is now dualband 850/1900 MHz instead of the European 2100 MHz. The battery size has also increased to 1200 mAh, something the N95 should have had from the start. The back is now black as well and it ships with a 1GB microSD card.

Will the N95 8GB come with this larger battery? We certainly hope so.

NSN preformed quite poorly according to Nokia's results for 2Q of 2007. We didn't talk about it here at IntoMobile,...