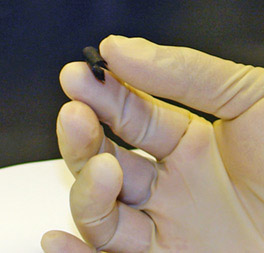 Forget fuel cells. Move over Lithium Ions. There’s a new kid in town – promising to help us power our mobile phones with our blood, sweat, and even pee! That’s right, the new battery technology developed at Rensselaer Polytechnic Institute can use the electrolytes in bodily fluids to conduct electrical current. While we’re a little averse to drawing blood to power our mobile phones, the prospect of using our sweat and urine to get those extra few minutes of talk time is incredibly intriguing.

Researchers at the Rensselaer Polytechnic Institute have developed what is basically a plain sheet of paper (it’s actually 90% cellulose – the same stuff that makes up notebook paper, books, lunch bags, etc.) that has been impregnated with perfectly-aligned carbon nanotubes.

The carbon nanotubes give the paper its black coloring and serve as electrodes – allowing the paper to conduct electricity. The paper-battery can serve as both a lithium-ion battery and a supercapacitor – allowing it to “provide the long, steady power output comparable to a conventional battery, as well as a supercapacitor’s quick burst of high energy.”

Researchers used an ionic liquid – basically a liquid salt – to serve as the electrolyte that powers the battery. The ionic liquid allows the battery to work in extreme temperatures – up to 300 degrees Fahrenheit and down to 100 below zero (since the ionic liquid contains no water, there is nothing to freeze or evaporate). Any electrolytic fluid can be used to power the battery, which makes the device perfectly suited for biological applications – pacemakers powered by the blood that surrounds it.

We’d rather have this paper-battery in our mobile phones. How cool would that be? “Hey, I’m gonna go to the bathroom and recharge my phone.” Yea, definitely trick.

It looks like Samsung is really gunning for the gaming-handset market. Following up on their recent patent application for a...