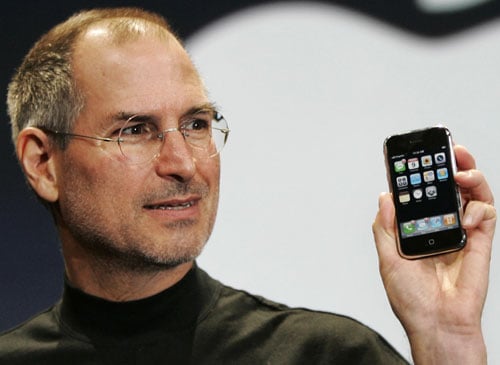 According to this leaked rough draft of Steve Jobs’ keynote to take place at MacWorld in less than 24 hours the 16 GB will launch for $500, Japan will get the iPhone with NTT DoCoMo and the SDK for the iPhone platform will be shown off. Two categories of programs can be available for users: applications and widgets. Applications can be priced from $0 to $7 with widgets being $0 to $3. Developers will have to submit their source code to Apple, who then has to validate it, before it gets added to a repository in iTunes. Apple gives developers 70% of the profits.

If I was a developer I would be horrified by the fact that I would be submitting my code to a company who can easily just steal my idea and integrate into a firmware update, but at the same time I love how applications and widgets are integrated into the iTunes experience. The hardest thing all the smartphone platforms have going for them right now is the discovery of third party applications. Taking the Linux approach and creating a single repository of all available applications is absolutely brilliant and I hope to see Nokia doing it for S60, Sony Ericsson and Motorola doing it for UIQ, Google doing it for Android and Microsoft doing it for Windows Mobile.

Other things we can expect is the integration of iChat in the 1.3 firmware, although no one in Europe uses AIM or Jabber. The 1.3 firmware is expected to be released in early February, just in time for the Mobile World Congress.

Just in case the Apple PR Nazi’s ask Pocket Lint to take down their content I’ve mirrored it, after the jump.

UPDATE: I don’t want to treat this as fact so I’m adding a question mark at the end of the title, we will find out in less than 24 hours if any of this nonsense is true.

We’re used to seeing the online tech world go crazy with rumours and speculation in the days before Macworld, but this year a new element has been introduced to the mix.

Steve Jobs’ keynote speech, that he is due to make on stage at the Moscone Centre in San Francicso on Tuesday 15th January, has apparently been leaked via Wikipedia.

With highlights including a 16GB iPhone, details of the SDK for the device, a 13-inch 0.8-inch thick redesigned MacBook and direct YouTube for Apple TV, it would not be a dull keynote if it’s all true.

In its entirety, if the sources are to be believed, here is what Monsieur Jobs is to cover during tomorrow’s time on stage:

Quick Overview: iPod/iTunes
– iPod has been extremely profitable for us this holiday season

– Our new models are doing better than ever

– Today: 30 indie labels releasing their entire catalogs in iTunes Plus

– Many more to follow in the next few months

– Sales beyond our wildest dreams

– Four times the memory as original iPhone for the same price

– iPhone is coming to Japan in March with NTT DoCoMo
– SDK is unveiled!

– Specify iPhone or both iPhone/Touch (certain features iPhone only)

– Demonstration of exporting from XCode 3 to iTunes Store

– Submits source code to Apple for validation (make sure that people aren’t abusing the system, prevent malware and viruses)

– If using microphone or GSM, iPhone only; otherwise, available for both iPhone and iPod Touch

– Developers recieve 70% of revenue for their products

– Demonstration of wirelessly downloading (and running) the app submitted earlier

– Apps and widgets can be rearranged on front screen; front screen scrolls to show all apps/widgets

– Developers can get their hands on a beta version of the SDK tomorrow on ADC and start developing; final version due early February

– One of our partners made something cool: Last.fm (scrobble tracks played on iPhone/touch wirelessly without syncing w/ computer)

– Try these out on the show floor today

– Sales are getting better and better every day

– Selling extremely well; estimated to overtake Tiger in terms of marketshare by June if you only count the new Macs that come with it preinstalled; even quicker if you include boxed copies

– 10.5.2 out today – many bug fixes, also addressing a lot of issues and complaints users had such as list view with stacks and certain HIG non-compliance issues

– What would MacWorld be without a new Mac? (sorry about last year)

– DVD drive pops open on side when eject button is pressed

– Completely phasing out the combo drive on all product lines today

– BTO models can upgrade all the way to 2.6GHz/4GB Memory/320GB hard drive

– Been brewing for a while

– YouTube’s been in Apple TV and iPhone/iPod touch: now it’s in iTunes

When you think about it, you shouldn't be surprised that David Lynch doesn't like the idea of watching a movie...