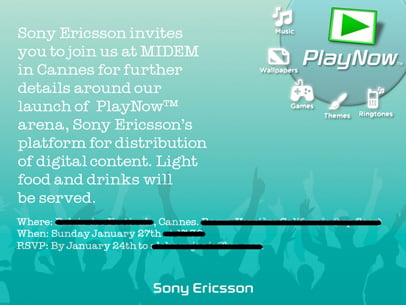 IntoMobile reader Ron Smeets recieved an invitation to attend Sony Ericsson’s Play Now Arena launch on the 27th of January, he was nice enough to share this picture over at his blog Mobile Cowboys. It says: “Sony Ericsson invites you to join us at MIDEM in Cannes for further details around our launch of PlayNow arena, Sony Ericsson’s platform for distribution of digital content. Light food and drinks will be served.”

This confirms the leaked press release schedule I posted earlier today and Engadet’s post from ages ago about Play Now Arena.

If this leaked press release schedule is to be believed, which is plausible since Sony Ericsson does a horrible job...