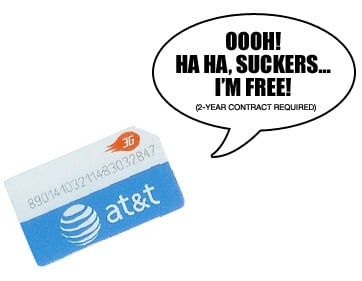 I’ve held off on blogging about the recent news that AT&T now sells SIM cards. Here in Europe buying a SIM card is like buying a bottle of Pepsi, you’re in and out in less than 30 seconds. When I went to the states during Christmas I stopped by a T-Mobile ship to pick up a SIM since they have unlimited EDGE data (ask for t-zones) for only 7 dollars a month. They wanted my ID, my address, my home phone number and a urine sample. I felt like I was being interrogated all for a god damn piece of plastic with microchip that I would be using for only 3 weeks. A 10 minute argument with the 17 year old pimple faced, incredibly busty breasted bimbo working the register and I got what I needed. I pay per month, what normal users pay, plus an extra $5 because I was considered an undesirable by the Führer.

Apparently AT&T service will now be equally as easy to obtain and since they offer the only HSDPA network in the states they’re looking a lot more attractive than T-Mobile. Don’t even bother telling me T-Mobile has 3G, no one makes a smartphone that uses the 1700 MHz band. The blogosphere blew up when a typo stated you needed a 2 year contract to get a SIM card, but Gigaom clears up the miscommunication by actually doing something called real journalism and contacting a source.

Ricky Cadden says AT&T still manages to muck up MMS, but we have to be happy that baby steps are being taken.

The ugly-duckling of Mobile TV standards definitely didn't get off to a good start in 2007. MediaFLO, wholly owned by...