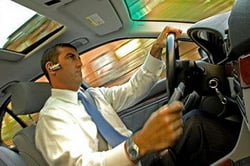 California drivers, be warned. The new California law (VC §23124), requiring that all adult drivers use hands-free cellphone solutions when behind the wheel, goes in to effect on July 1.

If the risk of getting cited for driving with a cellphone pressed up against your noggin isn’t enough to sway you, then go about your hand-occupying conversations. But, if you just don’t want to go through the hassle of having a nice chat with law enforcement personnel, only to be asked to pay a nominal fee, pay heed.

California drivers 18 years of age and older can be fined $20 for the first offense with each additional infraction costing $50 a pop (before penalty assessments that can drive up the fine three-fold). So, no matter how you do it (speakerphone, wired headset, Bluetooth headset, vehicle integrated Bluetooth system), make sure you keep your cellphone-holding hand away from your face. With luck, we’ll be seeing fewer distracted drivers on California’s highways and byways.

And, July 1 represents a new age for California roadways. Apparently, California lawmakers are just as fed up as we are with hordes of already distracted teens adding a mobile phone to their list of distractors. A second law will be penned in California lawbooks (Vehicle Code §23123) that will make it illegal for any driver under the age of 18 to use a mobile phone in any manner, while driving. Even the use of hands-free headsets can be cited as a secondary offense (if the driver is already being cited for a separate primary offense).

Both laws will hopefully crack down on distracted drivers in California, but our gut tells us that we won’t be seeing radical changes. So, go dig out your unused Bluetooth headset or figure out how to pair your phone with your in-car system. It’s worth it not to have to entertain John Q. PoliceOfficer on the side of the road.

Roughly 10 days ago we wrote that fring has opened up its platform allowing third-party developers to create the so...