Sure, there are many out there that have noticed a marked improvement in the iPhone 3G’s keyboard responsiveness and improved web-surfing reliability. But, the majority isn’t the concern here. The minority of iPhone 3G users experiencing problems is just as, if not more, important to Apple’s public relations than the majority of problem-free users. Praise for a working product can’t help mask the complaints of the enraged few that deserve to have a fully-working handset. 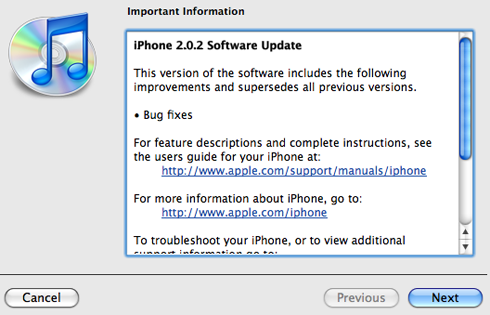 The iPhone 2.0.2 OS seems to not only have failed to fix 3G reception issues, but has caused third-party applications to crash repeatedly, sometimes failing to start up at all. And, some iPhone 3G users are experiencing problems with voice calls on the 3G network – specifically, they just can’t make alls on the 3G network.

It seems that Apple sees the bug-addled minority as a compelling reason to get another iPhone OS update out in to the ether. There are claims that Apple has responded to some email inquiries, assuring them that solutions to  iPhone 3G connectivity issues and crashing application will be released soon. But, the real question is, what is Apple doing with their iPhone 2.0 OS that is causing so many problems? The iPhone 1.0 OS was rock-solid in comparison, what is it about 2.0 that Apple just can’t seem to get right?

Perhaps the next iTunes update will help fix some problems?