Convergence this, convergence that. In the mobile world it’s all about converging multiple devices/features into a single, mobile device. The latest converged technology concept comes to us from Boston University’s College of Engineering. Using a National Science Foundation grant, researchers are looking to converge wireless data communications into a lowly light-bulb. The engineers hope to use low-power LED light-bulbs as an optical wireless network of sorts.

Rather than using RF (radio frequency) wireless technology to create a wireless data network that consumes a good deal of power and is vulnerable to eavesdropping/hacking, the new LED light-bulbs would transmit data with imperceptibly-fast pulses of visible light. Initial bandwidth is expected to range anywhere from 1-10Mbps. 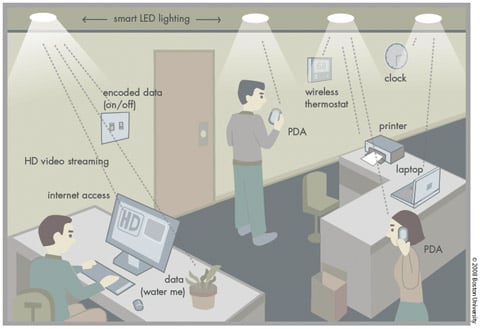 “Imagine if your computer, iPhone, TV, radio and thermostat could all communicate with you when you walked in a room just by flipping the wall light switch and without the usual cluster of wires,” said BU Engineering Professor Thomas Little. “This could be done with an LED-based communications network that also provides light – all over existing power lines with low power consumption, high reliability and no electromagnetic interference. Ultimately, the system is expected to be applicable from existing illumination devices, like swapping light bulbs for LEDs.”

Each LED light-bulb would work as a wireless access point, offering greater bandwidth and significantly reduced power consumption. And, because the LED-based optical communications networks uses pulses of visible light, people outside the network’s line-of-sight (through a wall, floor, etc.) are completely cut-off – reducing the possibility of network-leeching and nefarious hacking.

We could one day be connecting to our home or office’s wireless network with a flip of the light-switch. Imagine that.

If, for whatever reason, your iPhone or iPhone 3G's iPod music player just isn't cutting it for you, PwnPlayer could...