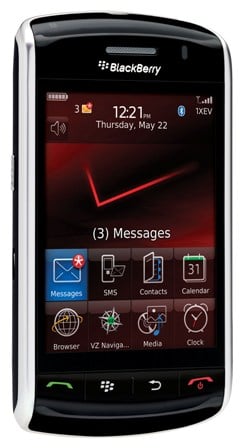 The Verizon BlackBerry Storm goes live tomorrow, but lots of reviewers are getting their mitts on early units. Most impressions have been good up to this point, but it seems that given some time to really tinker, reactions are a little more mixed.

Going into this review, we really wanted to love this phone. On paper it sounds like the perfect antidote to our gripes about the iPhone, and in some ways it lives up to those promises — but more often then not while using the Storm, we felt let down or frustrated. Ultimately, this could be a great platform with a little more time in the oven, but right now, it feels undercooked — and that’s not enough for us. – Engadget

The BlackBerry Storm is not perfect, but, in my humble opinion, it is the best BlackBerry yet. … There were definitely some bugs with my review unit. Lag was a recurring issue all over the place. Perhaps Verizon Wireless and RIM will be able to fix the lag with a firmware update, but perhaps not. That’s something you might want to ask of your local Verizon retailer. – PhoneScoop

Overall we have to say this is the best phone to hit the market since the iPhone. Readers should note we will not compare the iPhone to the Storm since the iPhone is clearly not a full fledged business messaging device. If you are in the market for a new phone the Storm definitely has to be on your holiday list this year! Great job RIM! – Mobility Today

We still think there’s room for improvement, especially polishing up the calendar and address book to make them look as crisp and modern as the main menus and media player apps. But even with these minor complaints, we have no trouble declaring the BlackBerry Storm the most compelling BlackBerry phone to date. – infoSync

When I played with the BlackBerry 9530 last month, the OS was still very much a work in progress. Based on these reviews most of the issues have been solved; these impressions, though predominately positive, are just shy of expectations. It looks like the overall experience could be smoothed out a bit, but there are still firmware upgrades on the way. What do you guys think – overhyped? Undercooked? If you’re still looking to buy despite the reviews, you can pick up the BlackBerry Storm from Verizon tomorrow for $199 on a two-year contract after rebates.

If you’re looking for video reviews, be sure to check out our updated BlackBerry Storm Video Roundup for the latest.

More mixed reviews of the Verizon BlackBerry Storm after the jump…

At the end of the day, if you’ve been eyeing the Storm, we suggest you either go play with a demo unit at a store, or go ahead and buy one. That way you’ll be able to decide for yourself if you really love the thing, or maybe just don’t care for it. This isn’t a cookie-cutter device, and it’s not for everyone. That said, we’re sure these things are going to fly off the shelves at Verizon stores on Friday, we just have a feeling there will also be a lot of returns. – Boy Genius Report

Overall, the Storm is a very capable handheld computer that will appeal to BlackBerry users who have been pining for a touch-controlled device with a larger screen. And it offers yet another good option for anyone who is looking to buy one of the new, more powerful, pocket computers. – Walt Mossberg

We’ve only had the Storm in hand for a few hours but so far it’s easy to state that the Storm is the best Blackberry we have used to date. It is a phone that is definitely focused on the consumer with advance media player, web browser and online tools but it’s still a Blackberry meaning it works well for the professional too. – jkOnTheRun

I love BlackBerrys and will finally admit that the iPhone is not stupid. I refuse to give up one for another, so I carry around both devices. I wish the Storm were the real iPhone killer, but it’s not and I’m afraid there won’t be anything to ‘kill’ it for a while. … If you can get used to the click screen and I’m sure you will (and so will I, but I’ve only had it for 36 hours thus far) then the Storm combines what’s great about RIM and their products and does a decent job of bringing in the touch-screen aspect. I won’t be ditching my Bold or iPhone 3G for the Storm, but if you’ve been waiting for it then I strongly encourage you to go to your local Verizon Wireless store and spend some time with it. – CrunchGear

But people who were hoping for a credible iPhone alternative fortified with BlackBerry’s strengths as a mobile tool for corporate travelers will likely find the Storm a disappointment. When it comes to touch interfaces, Apple still has no peer. – PCWorld

Would we recommend the Storm? If you’re locked into a contract with Verizon, want a touchscreen phone, and are willing to put up with an OS that moves like a tranquilized yak, then yes the Storm is for you. Otherwise, your best bet is an iPhone or the very capable BlackBerry Bold. In any case, Apple need not fret; even in the face of a legitimate iPhone killer, they still offer more touchscreen goodness for the money and will undoubtedly, ahem, weather this storm. – Wired

If, like many Americans, you’re planning to scrimp your way through the holidays, the Storm isn’t worth busting your budget for. Even die-hard BlackBerry fans would be better off with RIM’s new Bold, Pearl or Flip. All three have many of the same pluses as the Storm, minus the drawbacks of the unusual display. This is one storm you’ll want to steer clear of this winter. – TIME

As is, if the user front-end worked, the Storm would be winning awards for call quality, media support, miscellaneous extras, a high-quality camera and built-in GPS – after all, it is an uber-phone at a decently low price. But know this before taking the plunge: Thumb-punching typists and those expecting an iPhone-caliber experience won’t be pleased, and may decide to accidentally run over it with their Hummer. – I4U

When you look at your typing, slow and typo-ridden, and you repair the dents you’ve made banging your head against the wall, you’ll be grateful that Verizon offers a 30-day return period. How did this thing ever reach the market? Was everyone involved just too terrified to pull the emergency brake on this train? – David Pogue

But ultimately, the Storm’s success will be based on whether or not the masses take to the SurePress touchscreen, and my guess is that it’s going to be a love it/hate it kind of thing. My only problem is that I haven’t picked a camp yet. – ZDNet

The Storm is a strong effort from RIM, but it’s not quite the killer phone that they or Verizon need it to be. It’s good—RIM clearly put a lot of thought into the design. But I think it fall short of what they were aiming for, and ultimately what all the hype is driving people to expect. Some of this is fixable: The damn thing needs to crash less often. But SurePress is not the end-all, be-all of touchscreen technologies—it’s not really an evolutionary step forward, even. The experience may be fairly refined, but more polish is still needed. Had this Storm been left to brew a bit longer, it would’ve been much more powerful. – Gizmodo

Where the BlackBerry Bold scored well on battery performance, it looks as though the Storm could be a victim of its beautiful display. Having unplugged it from the charger at 7.30am this morning, it’s been receiving email all day, used for a tiny amount of surfing and no instant messaging, and for two or three short phone calls (all of great quality); the battery meter is already down to a single bar. To be fair, Bluetooth has been switched on throughout, but considering it’s now a staple of business life that doesn’t exactly fill us with confidence. We’re hoping that a few more charge/discharge cycles – which at this rate will happen soon! – will stretch some more life out of the battery. – Slashgear

The BlackBerry Storm is an ambitious device, and we generally like the design and what RIM was attempting to accomplish with the interface. Plus, the GPS performance, call quality, and loud speaker are major pluses. But we’re disappointed in the sluggish performance and buggy software, and the one thing that most BlackBerry users have grown accustomed to—a superior keyboard—is frustrating to use on the Storm. Our recommendation right now would be to hold off on purchasing this smart phone until Verizon Wireless and RIM can work out the kinks. – Laptop Magazine

I’m excited by the RIM BlackBerry Storm 9530, but I can’t recommend it strongly yet. Like the BlackBerry 8220 Flip, it’s just too buggy right now. If the phone worked as advertised, it would be one of the two best smartphones you can get in the U.S. (along with the Apple iPhone)—a true breakthrough and a potential 4.5-star product. But until RIM fixes the many scattered bugs, you should wait out the Storm. – PC Magazine

With all of these hands-on videos popping up, maybe it's time we take a trip down memory lane and pull...