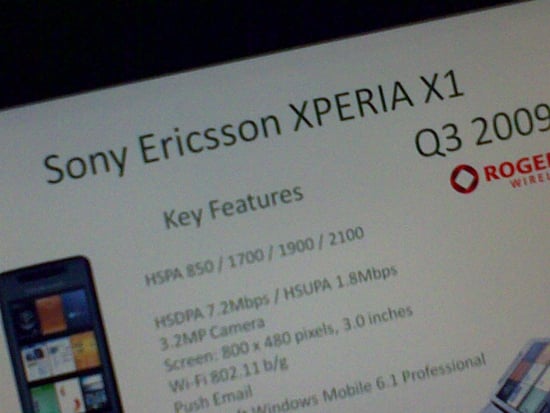 Hooah, that’s a spicy Q1 ’09 lineup for Canadian carrier Rogers, boasting new goodies like a Wi-Fi BlackBerry Storm and 3G Pearl Flip, but a few things you might have heard about before are also on the way for 2009, including the Sony Ericsson X1 EXPERIA. Here’s the full list.

BlackBerry 8200 Pearl Flip – Due first half of 2009 – Dual-band HSDPA (850/1900) BlackBerry Pearl with Wi-Fi, including a secondary video calling camera, 2.0 megapixel camera with flash

While I can’t say much about the other handsets (aside from the fact that the entire universe and its mother is waiting for the XPERIA), both the 3G Pearl Flip and the Wi-Fi BlackBerry Storm are giving much-needed feature upgrades to some hurting devices. A video conferencing camera could give the Pearl Flip a nice little kick in the pants that might actually have the flip-phone crowd notice it, while the lack of Wi-Fi on the BlackBerry Storm remained a primary gripe for most reviewers. A GSM version of the Storm was already released abroad on Vodafone, so we weren’t exactly expecting a whole new device over here in North America, but it’s more than welcome.

Full slide gallery of Rogers’ 2009 handset lineup after the jump!

A few months ago RIM and Motorola growled at one another over the BlackBerry-maker trying to nab their employees, but...