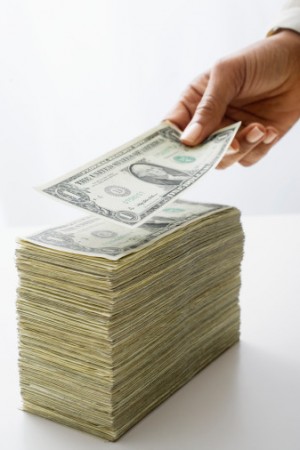 Even the harshest of stormy economic-clouds has its silver lining. The maelstrom of economic bad news has at least one bright and shiny upside – discount wireless carriers are seeing a late-year boost to their stock price.

MetroPCS, which offers cheap handsets tied to unlimited wireless calling plans (within Metropolitan borders), has seen its stock price jump 39% since November 21. In that same time, rival entry-level wireless operator Leap Wireless has seen an impressive 80% jump in stock price. Both carriers offer bare-bones unlimited calling plans starting from $30-$35, but limits subscribers to their hometown’s metropolitan area. Larger carriers like AT&T, Sprint, and Verizon all offer unlimited calling plans with nationwide network coverage and perks like fast data speeds, but will cost about $100 per month.

The late-year rally in entry-level wireless stocks is reflective of the US market’s preference for business and services offering discount prices. Businesses that cater to lower-income or otherwise frugal shoppers tend to weather economic downturns better than, say, their high-end counterparts – just look at Walmart’s success amidst the US economic meltdown.

“Investors are seeing the Leap-PCS model as more resilient in a recession, similar to what we have seen at Wal-Mart and McDonald’s,” said John Hodulik, a UBS analyst. “I also think cheaper gas means more money in people’s pockets in the segment of the market that both companies focus on.”

And, with the recession expected to hasten many US households’ move to ditch their wireless telephones for a wireless-only lifestyle, MetroPCS and Leap Wireless may benefit the most.

“With the weakening economy, the trend toward wireless substitution will accelerate,” said Kevin Roe, principal of Roe Equity Research. “The entire wireless industry has benefited for years from cutting the cord, but Leap and MetroPCS may be greater beneficiaries in a weakening economy. To some extent, a weakening economy is their friend.”

Keep an eye out for entry-level wireless carriers making big moves in 2009!

We've seen many a camera add-on that turns your cellphone camera into a microscope or telephoto shooter. But, it's not...