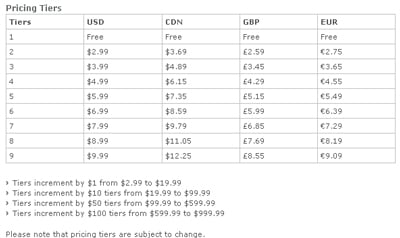 Last night, blackberry.com/appworld went live, including notification page so you can get e-mailed when their new on-device software distribution channel goes live, as well as a handy FAQ answering a lot of questions. The one that’s garnering the most attention is their pricing structure, above, which, after free, starts at $2.99. Yep, no dollar-bin apps, or even $1.99 apps. On top of that, developers will have to fork out $200 as a submission fee to get ten apps in. It looks like the BlackBerry App World will be something of a walled garden, versus Android’s open source utopia, and the iPhone App Store’s lively playground of farts and light sabers.

This kind of approach is double-edged; on the one hand, you’re raising the bar for developers to make something good enough that they can A) make back their entry fee, and B) sell for at least $2.99. On the other, BlackBerry developers already have a rough enough time as is, and they really don’t need any more reason to go sniffing around alternatives. Additionally, a smaller selection could mean slow momentum for the App World, regardless of the calibre of those apps.

As a point of reference, eight out of the current top ten apps selling in the iPhone App Store are priced $1.99 or less. The Android Market’s price cap is $200, while the App World will match Apple’s $999.99 cieling. What do you guys think? Is RIM shooting itself in the foot without a $0.99 tier, or is it raising the bar for a market that’s quickly getting flooded with trash?

March 8th is the International Women's Day and to celebrate the event, Symbian Guru is running an interesting contest. Unlike...