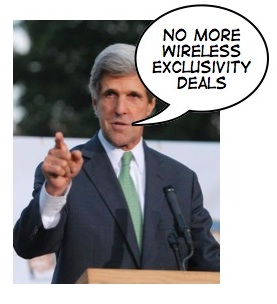 The long-held tradition of tying cellphones to a certain wireless carrier has been under fire for years now. Last year, the Congressional Subcommittee on Telecommunications was discussing the “fairness” of mobile phone exclusivity agreements sought by wireless carriers and handset manufacturers. Today, our elected officials are taking the fight against exclusivity agreements to the next level. Politicians apparently do serve a purpose in the US government.

A group of US Senators (including former Presidential hopeful Sen. John Kerry) have requested that regulators at the FCC review the practice of locking mobile phones to particular wireless carriers. The chief concern is that these exclusive agreements hurt consumer choice. The letter to the FCC reads:

“We ask that you examine this issue carefully and act expeditiously should you find that exclusivity agreements unfairly restrict consumer choice or adversely impact competition in the commercial wireless marketplace.”

We most recently saw the Rural Cellular Association coming out against exclusivity agreements between wireless operators and handset vendors with their petition to the FCC to request a review of AT&T’s iPhone exclusivity contract with Apple.

With a little luck, the unlocked handset market will become a viable reality in the US. And we’re only a decade or so behind the rest of the world. Not bad, eh?

GetJar (who I have written about a number of times) has been tapped by Virgin Mobile France to provide it's...