In about 15 minutes Intel will be hosting a call to discuss their collaboration plans with Nokia. If you’d rather listen to that call without reading my snarky commentary and the occasional swear word, click here.

Intel has pulled the trigger and released some PR material about what is going to be announced. Nothing Earth shattering to be honest, which is why I’m hoping the call will yield some more meaty substance. A few select quotes:

Enjoy the notes after the jump:

[Time is in the Helsinki, Finland time zone] 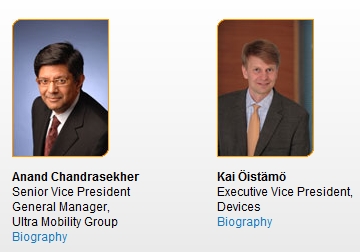 Ebony and Ivory by Paul McCartney comes to mind.

18:21: Music changed from classical to some stuttering mix of new age and jazz. Terrible background noise. Are they playing this off a damn tape deck they found at a garage sale?

18:22: A woman just got on and said thank you for joining. She sounds like your typical operator. They need to get celebrity operators to liven these conferences up. Back to the shitty new age flute playing music. Scratch that, solo piano now.

18:31: This is the most unprofessional hold music I’ve ever heard. On any call. Ever. In my life. It seriously sounds like a jazz record that was used as a frisbee for a decade and a half that is now playing on a record player that has had the same needle since the 1930s. They’re a minute late.

18:34: Operator: We’re still waiting for people to get in on the call, let me throw on some smooth jazz on to help calm your nerves.

18:37: Music switching from stereo to mono and back again. Volume going up and down like a Billy Mays commercial. Seven minutes late.

18:41: Anand is basically reading the press release I linked to above. Dear Kai: Please get off the speaker phone and in a room with less echo. You sound like you’re in a cave.

18:42: Anand: “Before we get into the details of our collaboration, let me tell you how awesome the internet is and quote some really fucking large numbers in an attempt to blow your mind.”

18:44: Anand: “Our industry is getting really big and we impact lots of lives. We ship lots of chips that go into lots of computers. We’re experts at making these chips. You’ve heard of Moore’s law? We wrote that shit. Don’t fuck with us.”

18:48: Anand: “We’re going to license Nokia’s intellectual property to put 3G into our device since we realize WiMAX is garbage. After all, the first WiMAX device to ship was made by Nokia, and they killed it because no one wanted it.”

18:51: Anand: “I deeply admire Nokia. They have awesome visions. The products are another story, but we’ll fix that by letting them use our chips.”

18:52: Kai: “In summary: we’re going to work together, for a long time, to build open standards based hardware.”

18:52: Analyst from Oppenheimer: “Yo, time lines, give them to us. Three years ago you had a relationship on data cards, what happened to that?”

18:54: Kai: “I don’t have anything to tell you, so let me repeat what I said earlier to kill time. Regarding the data card thing, yea … forget that ever happened. It didn’t work, the timing was bad. We’re going to try again.”

18:55: Bloomberg News Reporter: “Visions are fantastic and all, but we all know Intel has been trying to penetrate the mobile market for years. Can you talk about when you’ll actually deliver something versus talking about your LSD induced vision of the future?”

18:58: Kai: “Like Anand, I will refer you to the press release. I will also accidentally call our Maemo operating system Moblin, which is the name of Intel’s Linux based OS. Linux is a buzz word so let me repeat it three times to wish this collaboration good luck.”

18:59: Business Week: “Your phones run on ARM, when will you make Intel based handsets?”

19:02: Anand: “We’re not talking about products, timing, and I refer you to the press release, which I’ll read again to kill time so I don’t have to answer your stupid questions again.”

19:03: Kai: “When it comes to licensing our modem technology, we want to give everyone a taste of our milkshake. We’ll make a lot of money like that, what’s so hard for you to understand?”

19:04: Another guy from Buisness Week, Cliff: “You’re dating Nokia, how is that going to impact your relationship with other handset makers?”

19:05: Anand: “It’s an open relationship. Nokia and Intel are engaged in an active swinging lifestyle.”

19:05: New York Times: “You vague ass motherfuckers, can you give us any detail? I woke up at 10 to listen to this? You could have just emailed me the press release!”

19:06: Kai: “I use a Nokia N97, which has a terrible email client, so let me read you the press release again, like I’ve done twice before, and Anand once.”

19:08: Anand: “When we have something to tell you, we’ll make you wake up at 8 in the morning and forget to email you the press release.”

19:08: Dean from Venture Beat figured out how to use his phone: “Are you expecting x86 architecture to become the default architecture of mobile devices going forward?”

19:10: Operator: “I hope you all enjoyed wasting your time. If you have any more questions, contact either Intel or Nokia PR people who will be more than happy to read you the press release we published today. Again. And again.”

What you're looking at is supposedly the Nokia 3720. It's going to either be announced, or start shipping, in September...