It’s “Fight Night” at the IntoMobile Mobile Battle Arena! The two enterprise smartphone heavyweights from Taiwan and Finland are going head-to-head in a battle for smartphone supremacy. Will the HTC Touch Pro2 “The 1-2-3 From HTC” manage to knock out the Nokia N97 “The Finn-isher”? It’s going to be a close fight. Let’s take a look at our two smartphone contenders!

The HTC Touch Pro2 takes its new place at the top of HTC’s Windows Mobile smartphone portfolio. The Touch Pro2 basically takes the original HTC Touch Pro’s recipe for a true business-class Windows Mobile smartphone and spices it up with an extra helping of processing power and a much larger touchscreen display. As the baddest WinMo handset in the Taiwanese smartphone maker’s stable, HTC blessed the Touch Pro2 with all the latest and greatest smartphone features on the market. It’s got a class-leading 3.6-inch WVGA (800×480) resistive touchscreen display, 3.2-megapixel camera, 3G data connection (HSPA), WiFi, GPS, a Qualcomm MSM7200A 528 MHz CPU, and a slide-out QWERTY keyboard – ensuring the HTC Touch Pro2 comes ready to play with in the big leagues.

But, there’s always two sides to every story. On the one hand, we have the power-packed HTC Touch Pro2 aiming to take as much marketshare in the enterprise segment. On the other hand, we have Nokia looking to hold on to as much of its business customer-base with the power-packed Nokia N97. As an Nseries smartphone, you can bet your donkey that the N97 sports all the highest-tech features from the Espoo. Nokia has built a reputation for themselves with smartphones that boast some of the most-advanced hardware on the planet, and the Nokia N97 is no exception. Underneath the N97’s heavy-set exterior lies a 5-megapixel Carl Zeiss camera (with flash), 3G data connectivity, WiFi, GPS, 32GB of on-board storage, slide-n-tilt QWERTY keyboard and a speedy ARM11-based processor clocked at 434Mhz. And, the 3.5-inch resistive touchscreen display boasts near-HD resolutions, which makes for a dandy video-viewing experience. True to Nokia’s tradition, the Nokia N97 sets the standard for high-end smartphone feature-sets.

Both handsets offer comparable feature sets and don’t necessarily have any major usability issues. Both handsets feature slide-and-tilt touchscreens. Both smartphones have QWERTY keyboards. Both the HTC Touch Pro2 and Nokia N97 rock high-resolution displays paired to awkward mobile operating systems. We could keep going, but you get the picture.

So, which smartphone is the better choice? How does the HTC Touch Pro2 compare to the Nokia N97 in terms of a satisfying user experience? Watch the two smartphone heavyweights duke it out below!

The HTC Touch Pro2 wins the first round of the heavyweight battle. The Nokia N97 bests the HTC Touch Pro when it comes to 3G connectivity options (tri-band vs. dual-band), camera (5MP Carl Zeiss vs. 3.2MP), and FM radio. But, when it comes to usable specs, the Touch Pro2 is the clear winner. With a faster processor, loads more RAM and ROM and a much higher-resolution display, the Pro2 is a better choice… even without a 3.5mm headphone jack. 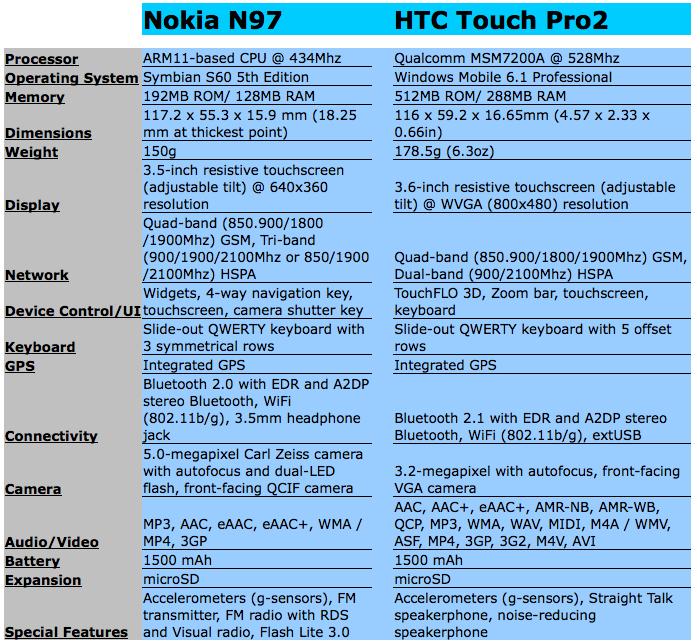