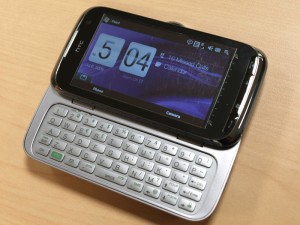 Excuse the scratched screen protector (which is why you need to use one).

HTC Touch Pro2 (Will’s take)
If you’re looking for a powerful business-class smartphone with the feature-set and processing power to help you run your life from the road, the Pro2 is about as good as it gets. The HTC Touch Pro2 brings an incredibly sharp, high-resolution touchscreen; a handy, noise-reducing speakerphone; decent 3.2-megapixel camera (with video recording); GPS, WiFi, Bluetooth 2.0, 3G data connectivity; and that trick slide-and-tilt QWERTY keyboard to the table – everything you could want in a smartphone.

Windows Mobile downsides notwithstanding, the Pro2’s UI is impressively finger-friendly and gives the aging OS a modern look and feel. As long as you’re willing to put up with the awkward Windows Mobile UI and carry a brick-sized monster of a smartphone in your pants-pocket or purse, the Pro2 will do you just fine. Add to that the fact that the Pro2’s keyboard blows the N97’s sorry excuse for a keyboard away, and you’ve got a solid winner on your hands.

Now, it’s all about waiting for your local wireless carrier to pick up the HTC Touch Pro2 and subsidize its cost to a couple hundred dollars.

Nokia N97 (Simon’s take)
The N97 had a lot of potential. It’s certainly not a trashy device, by any means, but it’s one I doubt few people are willing to shell out the $700 flagship stores are currently asking for it unlocked. In the long run, however, I think the N97 will do fine with the dedicated Symbian crowd at a $150-$200 price point once carriers pick it up and subsidize the cost. For those looking for a new smartphone, however, I don’t think S60 stands a chance against the initial “wow” factor that Android and the iPhone command, nor the simple, but immediately apparent utility of BlackBerry. As is, I’m giving the N97 a three out of five; with a smoother, more intuitive user interface, I’d give it a 3.5, and with a slimmer profile and capacitive touchscreen, the N97 would hit four out of five.

It’s a close fight between the Touch Pro 2 and the N97, but in the end, it mostly hinged on the difference in specifications. The Touch Pro 2 clearly outpaces the N97 with a 534Mhz processor (versus the N97’s 434Mhz), 288 MB / 512 MB of memory (against the N97’s 128 MB / 192 MB), and 800 x 480 screen  The N97’s been getting a pretty sound beating around the reviewing circles these days, but even if it gets knocked out by a stiff competitor in this weight class, the gap between the two is surprisingly small.