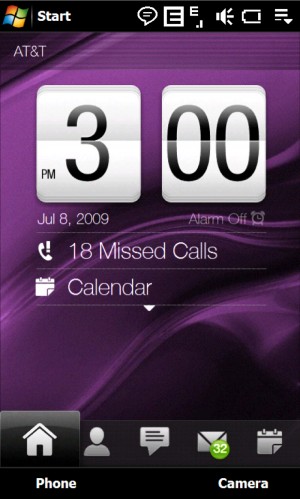 What can I say. The HTC Touch Pro2’s Windows Mobile 6.1 Professional underpinnings are, without a doubt, the smartphone’s biggest downfall. HTC did a great job of covering up the Windows Mobile UI, and even re-tooled many common Windows Mobile menus to be more finger-friendly. But, even with all that fancy TouchFLO 3D II goodness hiding the WinMo interface, it’s clear that the Windows Mobile platform (especially the “Professional” touchscreen variant) is getting a bit long in the tooth (read: old as hell).

Drill down past the first level of menus, and you’re stuck having to pull out the stylus if you plan on interacting with Windows Mobile’s minuscule buttons, check boxes and the like. Don’t even start thinking about trying to close an application or pull up the task list (upper right corner of the Windows Mobile UI) without a carefully placed finger nail or the stylus.

Even with gobs of memory and a speedy processor, the Touch Pro2 can sometimes become bogged down and laggy. I blame Windows Mobile for this. Every Windows Mobile smartphone, regardless of processing power, has exhibited some sort of delay or slowdown during moderate to heavy tasks (checking email while surfing the web, and trying to fire up a Twitter app). Push Internet and frequent email retrievals? Don’t even think about it. I had to set my email fetch frequency to some asinine interval and disabled Push Internet in an attempt to regain some system speed. Windows Mobile 7, where are you?

But, when you look past Windows Mobile, the HTC Touch Pro2 shines. Speaking of “Push Internet,” the TouchFLO 3D II UI boasts a pre-fetching website utility that will automatically download and cache pre-determined websites at pre-determined intervals. It’s not really “push” internet, in the sense that webpages are delivered to your smartphone, but the “Push Internet” feature makes for some speedy page-load times (seeing as how the Pro2 already has the page-data cached, avoiding the need to download data over a wireless data connection).

TouchFLO 3D gives the user a side-scrolling interface that looks and feels as smooth and finger-optimized as any touchscreen interface on the market. I’ve said it before and I’ll say it again, HTC knows what they’re doing when it comes to skinning boring UI’s. TouchFLO 3D UI and the HTC Hero’s Sense UI are prime examples of how hardware manufacturers, with the right resources, can do what software developers failed to do.

Overall, the Pro2’s operating system sucks. It’s actually the reason that HTC had to use a resistive (squishy) touchscreen on the Pro2. TouchFLO 3D II is the Pro2’s saving grace. 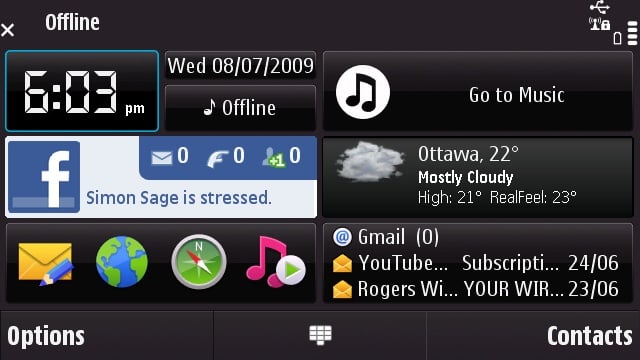 Nokia N97 (Simon’s take)
Here’s where life gets hard. After coming from the HTC Magic and its smooth Androidy transitions, Symbian felt just plain old. Don’t get me wrong, functionally, there wasn’t a thing I couldn’t do – send files by Bluetooth, set up my e-mail, browse the web, the whole nine yards, but it really doesn’t matter how much it can do, the basic experience still feels like it belongs five years ago, even with the “new” touch-friendly interface. The third party apps that I tried, like the Gravity twitter client and Google Maps for Mobile both handled smooth transitions and graphics swimmingly, so it’s certainly not a shortcoming in horsepower on Nokia’s part (although the 434 Mhz processor is significantly underpowered for the class).

It’s not even that I need swooshy transitions and bright colours to be impressed like some kid with a shiny new iPhone; after all, I’ve been packing the BlackBerry for a long time, which is pretty bare-bones when it comes to UI. The difference between the BlackBerry OS and Symbian, is that BlackBerry is smart. From the home screen, the whole QWERTY keypad is packed with shortcuts, and while new widget layout for touch devices is neat, it simply can’t compare to the same level of application access BlackBerry offers.  When compared to the Touch Pro 2, I can’t help but be a little jealous of the the great job HTC has done on TouchFlo 3D, and can only wonder why nobody has skinned Symbian as nicely.

The way Symbian handles connections is a hassle too. You’ll often get pop-ups confirming whether or not you’ll want to go online, and while I appreciate how the browser is counting every kilobyte of data, it’s not something I’d be concerned with if I bothered to launch it in the first place.

Finally, I wasn’t especially satisfied with the speed of the OS. A part of that was having to chew through multiple layers and subfolders to get where I wanted to, but overall, it felt like there was a lot of loading wait times, likely due to the sub-par processor. Every once in awhile, my Bold would get hung up on some glitch and I’d have to sit through it for a minute or so, but on the N97, it feels like I’ve got to wait for just about every navigation choice and application launch. In short, I can’t wait for a Symbian overhaul with supportive hardware. 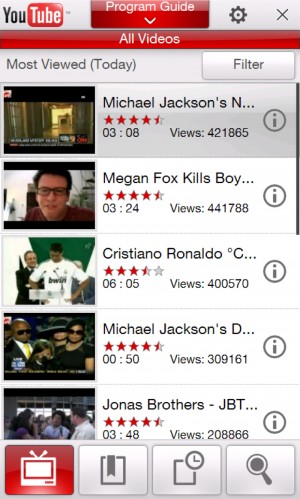 In general, Windows Mobile applications can be clunky. This is especially true for WinMo freeware. And, when dated UI design doesn’t get in the way of a good app, Windows Mobile insists on mis-managing resources and crashing/freezing applications on a whim. Of course, with the expansive collection of WinMo apps available online, it’s not hard to find a truly well-designed (but not free) Windows Mobile application. The pre-loaded WinMo apps – like YouTube, Google Maps, Teeter, Calendar, People – are examples of good software. As long as you remember to close applications as you move from Google Maps to YouTube to your Twitter client, you’ll find that the apps are a pleasure to use and quite stable.

In the end, applications on Windows Mobile are hit or miss. There are great pieces of software out there, but there are also stinking pieces of crap floating around the inter-webs. The trick is to concentrate on the eye-candy that is the TouchFLO 3D interface.

Nokia N97 (Simon’s take)
From the few that I tried, everything ran smoothly and generally hassle free. Using the resistive touchscreen wasn’t quite as bad as I thought it would be, mainly since the interface was amply adapted for finger use, but it does leave me wondering why they even bothered packaging the ridiculous, flat little stylus.

Like I said earlier, Symbian’s pretty functional (I’ve even seen folks use a Wiimote to play emulated games on it before), and have no complaints about the apps themselves. Discoverability, however, is hurting. The Ovi Store really didn’t step up to my experiences with the BlackBerry App World or Android Market on the HTC Magic. Again, it’s clunky navigating to a category view, only ten results are shown per page, thus demanding a lot of flippping, and the front page is diluted with other kinds of content like wallpapers and an entirely separate Games tab.

The Ovi Store might be a little underwhelming, but I was really impressed with the amount of preloaded apps on the N97. The Facebook widget is great, Qik came included, JoikuSpot was also there, RealPlayer, a solid weather application, and like I said earlier, the Podcasts application. Out of the box, there was very little I immediately needed to go hunting around for. Even Vlingo, a voice command app I thoroughly enjoyed on BlackBerry, was effectively built into the operating system.  I only wish more S60 programs had Widget support, which won’t happen for awhile, I realize, since it’s still relatively new to the platform.

Although Ovi’s not what you’d call awesome, it sounds like it’s more than what’s available for Windows Mobile; even if WinMo has a few more apps available than Symbian, the added discoverability, finger-touch friendliness, and widget support pushes this category ever-so-slightly in the N97’s favour. 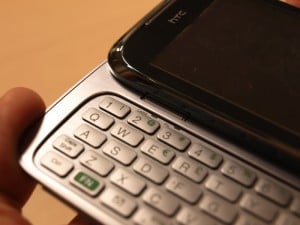 When it comes to messaging, the Pro2 seems almost purpose-built for this kind of work. Emails, SMS text messages, instant messages – it’s all good when you have the Pro2’s slide-out QWERTY keyboard handy. The keyboard, as I mentioned above, is darn near close to perfect. I actually prefer tap-typing on a touchscreen (iPhone style), but the Pro2’s keyboard is laid out well enough to almost make me reconsider my position on physical keyboard.

Dedicated comma and period punctuation keys flank either side of the space bar, which is located right where you’d expect it to be. I’ll let you guess where the space bar is located (hint: the Nokia N97’s right-biased shift button isn’t where a space bar should be). I’d liked to have seen more dedicated punctuation keys, but I imagine it’s a balance between too many keyboard keys and a balanced, well laid-out keyboard. I’ll take the balanced, comfortable keyboard over a dedicated question-mark key any day.

One downside is that the Pro2’s full QWERTY keyboard necessitates that you use both hands to type. For one-handed typing, I’d suggest keeping the Pro2 in the closed position and using the on-screen virtual keyboard (which is much improved, thanks to the revised, more accurate touchscreen). The worst thing about the keyboard is that you have to use two hands (two thumbs, really), which is pretty awesome. 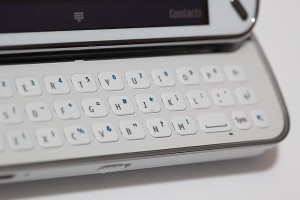 There’s been a lot of contention about the N97’s keypad. It’s very true that it takes awhile to get used to having the spacebar far on the right side, you do get used to it in time. The keyboard itself feels good – they’re shallow, so you won’t get a lot of give when you type, and the spacing is enough to get good movement between the keys. The D-pad hugs the left side of the keyboard a little too tightly, so you’ll occasionally move the cursor mid-sentence, but overall, I was happy with the keyboard itself.

All the common advanced characters are accessible through shift and alt keys, and more still through the Sym key, so those weren’t much of a problem, but what really stuck with me was the lack of intelligence in the output – that BlackBerry and the HTC Magic throw in to make life easier, like automatically capitalizing after a period, or heck, even putting in the period after two spaces. The more efficiently you can do little, common tasks like that, the better the OS, as far as I’m concerned. Although the N97 handles e-mail, contacts, SMS and all that jazz like a champ, the aforementioned issues with having to issue the pull command on your e-mail just kills me. I certainly appreciate the BlackBerry’s immediacy at this point.