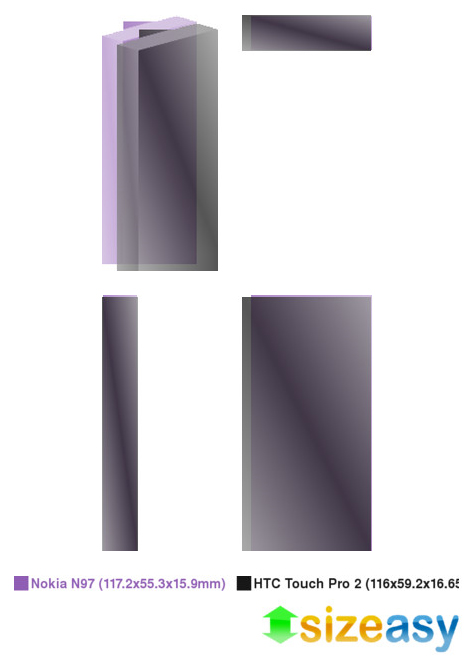 The HTC Touch Pro2 feels as solid as it looks. True, the Pro2 may look like a “brick,” but it also feels just as solid. One place that many smartphones, nay, mobile phones skimp is the quality of the battery cover/door. Many battery covers tend to feel flimsy and hollow, but the Touch Pro2’s battery door is as solid as they come.

Overall build quality is superb. My somewhat obsessive “rattle test” showed that the Pro2’s fit and material quality is top-notch. There’s a slight rattle when tapping the upper backside of the device, but I’ll give HTC a pass on that one. Even Apple’s iPhone 3GS yielded some annoying rattles during my “rattle test.” Given Apple’s reputation for building seriously solid hardware, the fact that the iPhone 3GS rattles just as badly as the HTC Touch Pro2 (with far more moving parts) should be a testament to the Pro2’s build quality.

The Pro2’s slide-and-tilt mechanism is fun to use, if a bit loose-feeling. Simon mentions that he played with the slide mechanism for several minutes before even powering on the N97 – I did the same with the Pro2. The N97’s tilt mechanism struck me as a little flimsy, but Simon is convinced that it is actually quite solid. The Touch Pro2, on the other hand, initially feels more solid than the N97, but has proven to be more wobbly when in the tilt-up position. The hinge mechanism appears to be some sort of friction hinge. It employs tiny powerful magnets to secure the screen in the non-tilted (flat) position, relying on friction to keep maintain the tilt angle. Unfortunately, when you tilt the screen all the way up, there’s a bit of wobble/play that annoys obsessive types like myself. If niggling problems like this don’t bother you, just ignore this paragraph.

Nokia N97 (Simon’s take)
One of my first thoughts when taking the N97 out of the box was that the battery door felt super cheap – mainly because it sounded hollow, but something about the texture felt off, too. Regardless, that issue quickly dissolved after playing around on the N97 for awhile. The proper chrome bezel on the front face is a great addition for both style and durability. The silver paint job around the rim of BlackBerrys I’ve used in the past always felt a bit phoney.

One of my favorite things about the N97 was the slide action. It opens smoothly and locks into its 35° angle solidly. When checking out the mechanism from the side, it does seem a little flimsy, with only three supports a couple millimeters wide and a circuit ribbon keeping the two parts connected, but you get no sense of fragility from actually opening and closing it. I spent a good ten minutes just flipping it back and forth before even turning the N97 on. Versus the Touch Pro 2, I didn’t find the flip remotely wobbly, even after a good two weeks of use. 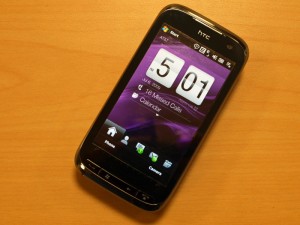 The Pro2 looks classy and refined, owing to HTC’s years of experience in the Windows Mobile smartphone segment. The large 3.6-inch touchscreen dominates the front face of the device, which is framed by a metallic bezel. I love that look. The all-screen look is the “hotness” right now, and the Pro2 is all about matching beauty with brains. Navigation buttons line the lower face of the device.

The Pro2 sports clean, curved lines. You won’t find any harsh angles or sharp edges on the HTC Touch Pro2. That may or may not fit your style, but it certainly makes for a quality-looking smartphone. Unfortunately, that also means the buttons are nearly flush with the device (like the call, end, start menu, and back navigation buttons), which makes for a great game of “Where is that button?” followed by a suspenseful bet on “Did I actually press that button?” Suffice it to say that the HTC Touch Pro2’s navigation, volume and power buttons lack tactile feedback.

And, speaking of button ergonomics, the power button (which resides on the top-left corner of the device) gets in the way of two-handed typing. I noticed that the power button is perfectly placed to get in the way of my left index finger while typing on the keyboard. Why does that suck? Because I’ll accidentally press the power button with the side of my finger at least three times during a web browsing/email writing/tweeting session. The power button on the Pro2 is a classic example of a minor oversight turning into a significant problem.

The HTC Touch Pro2 may not have all the sliding lens covers and device-lock switches of the Nokia N97, but the Pro2 most definitely 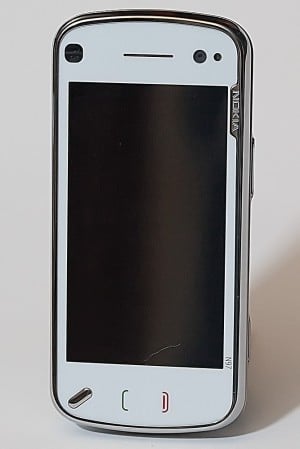 outshines the N97 in one critical area – the QWERTY keyboard. HTC’s experience with side-sliding QWERTY keyboard really shows in the Pro2’s keyboard. The keys are laid out in an offset fashion and are raised and separated enough to make touch-typing possible (with enough practice). The keyboard keys have enough travel and enough “click” to provide tactile feedback, but not so much that you feel that each key press is slowing down your typing session. One aspect of the keyboard that I took for granted was the dedicated comma and period keys. The N97 requires that you press the “function” (FN) key to type a simple punctuation – that’s downright unacceptable. The space bar? You’ll find it sitting in the middle of the bottom keyboard row. Overall, the keyboard on the Pro2 rocks!

The Zoom Bar. I mentioned the Zoom Bar’s awesomeness in my Touch Diamond2 review, and the same applies to the Touch Pro2. It’s an intuitive way to quickly zoom in and out of webpages, documents and pictures. I’d like to have pinch-to-zoom functionality on all touchscreen smartphones, but the Zoom Bar is a great alternative.

Nokia N97 (Simon’s take)
Aside from sheer build quality, the flip is pretty stylish, too. The angle seems just a tad too shallow to be able to watch anything while reclining and having the handset on a table, but if you’re sitting upright, it works fine. Stefan thought that the angle was too sharp to be able to see the keyboard and screen at the same time while standing, but I didn’t find it that bad at all, and the mechanism makes a hell of a lot more sense than the dinky kickstand that a lot of similar Nokia phones use.

Aside from that, all of the outer keys make plenty of sense – the lock switch is snappy and intuitive, the camera cover is easy to slide open and shut, 3.5mm headphone jack is always nice, and the front soft keys do their job. I’ll hold off on most of the keyboard talk for the messaging section, but I found the shallow travel not much of a problem. It has to be said that the overall size is pretty big, which isn’t helped by its unflattering, brickish lines when compared to the smooth curves of the Touch Pro 2. 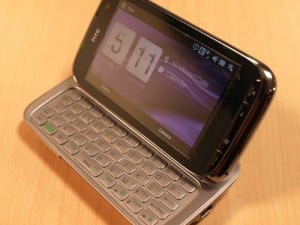 The HTC Touch Pro2 lacks a real headphone jack. A little birdie let me know that standard 3.5mm headphone jacks will become the norm for HTC in future handsets. But, for the Pro2, I’m left wishing the extUSB port (which triples as a charging port, data port, and headphone port) was just a plain 3.5mm headphone jack (what I would do for charging and data transfers, I don’t know – haven’t thought that far ahead). All I know is that I haven’t yet listened to a single song on the Touch Pro2 – mostly because I wouldn’t be caught dead using the black foam-covered ear buds that come with the Pro2.

The display is another story altogether. With an expansive 3.6-inches of touchscreen real estate, the Pro2 boasts the largest touchscreen in its class. And, it throws pixels out at WVGA resolutions (800×480). What is all that high-resolution goodness good for? Watching videos! It’s awesome, especially with the screen tilted up.

As for the squishy resistive touchscreen, the HTC Touch Pro2 sports a revised touchscreen design that does away with much of the touchscreen “squish” that plagues most resistive (pressure-sensitive) touchscreens. Still, there’s still a bit of touchscreen vagueness and squishiness. 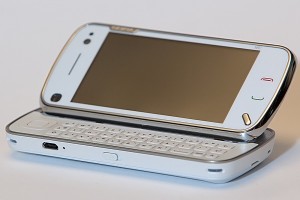 The 640 x 360 screen is crisp and bright, and plays videos hunky dory. There are a few formats it has trouble recognizing, but it certainly handles more than my BlackBerry Bold did. The built-in Podcasts application was a welcome addition, though – I found most of my shows without a problem in the catalog, but for those I couldn’t, it was possible to just plop in the podcast’s RSS feed and it was ready to go. It’s really nice to be able to get right into the podcasts without having to poke around for a third-party solution like I had to with BlackBerry and Podtrapper.

Using the N97 as a music player certainly does the job, although I think I would prefer using the BlackBerry. Sure, the N97 has 32 GB of on-board memory, but needing to unlock the phone in order to change tracks (even if those controls are on the home screen in a convenient widget) has become a bit of a deal-breaker for me. On the Bold, you just hold the volume key in either direction to change tracks, and the mute key to play or pause – this level of convenience is something I’ve missed since picking up the Magic two weeks ago. Lacking a little bit of intuition is an ongoing problem with the N97, as you’ll see.

Still, the Nokia N97’s 32GB of on-board memory and standard 3.5mm headphone jack makes the Finn-isher much more usable and flexible than the HTC Touch Pro2.

Note: Use a screen protector! Don’t question it. Just do it.