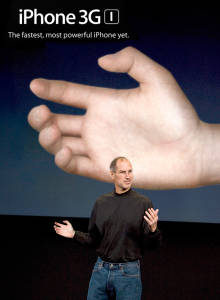 Think your iPhone 3GS is the greatest thing to happen to smartphones since the touchscreen? Well, think again. According to The Onion, Apple has just launched the iPhone 3GI. The iPhone 3GI packs significant hardware and software improvements, a more powerful processor and a touchscreen display that throws out the richest colors and highest resolution possible. But, the iPhone 3GI is only visible to the hardest-core of Apple fans – those that would never question anything Apple has to say about their products.

The iPhone 3GI will record HD video, edit video with Final Cut Pro, cook your dinner and might even solve world hunger. That is, only if you truly believe it can.

Here’s part of The Onion’s article:

According to Apple, the new iPhone 3GI boasts significant hardware and software upgrades, superior processing speeds, and a multi-touch interface that provides those who are “cool enough” with a rich user experience. The wide-screen display reportedly also features the most brilliant colors and finest resolution ever imagined.

“The new 3GI is as light as air,” said Apple senior vice president Philip Schiller, reaching inside an empty display case, apparently to remove the mobile device. “See how thin that is? It’s like it’s not even there.”

“Those who really understand what we do here at Apple are going to love this new product,” Schiller continued. “Unless, you know, they happen to be totally lame.”

Apple has fired another salvo against the iPhone jailbreaking scene with their claim that jailbroken iPhones could be used to...