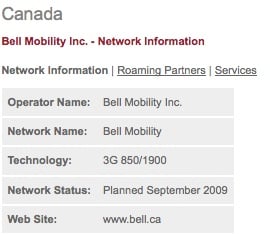 The GSMA has just updated their network status page with dates for Canadian carriers Bell and TELUS. Being Canada’s only serious competition to Rogers, the addition of GSM support will open a lot of doors for these two providers, both in terms of devices and service quality. Here’s a preliminary list of devices we can expect, based on rumours floating around the forums.

We had heard before that the iPhone would be coming to TELUS in October, so that much lines up perfectly, but everything else is conjecture for now. It’s also worth noting that newcomer WIND is set to have its network ready in November; we’ve got a decent idea of what devices and plans they will be offering, but will they be ready to rock for the holiday season?

AT&T has been testing their 7.2 Mbps data network in Chicago since December, but the service is now set to...