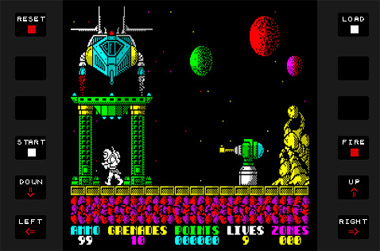 On the heels of the (removed) C64 emulator, we have a ZX Spectrum emulator called ZXGamer released in the AppStore. What’s strange about it, to say the least, is that it requires an iPhone 3GS to work. The strange part comes from the fact that Spectrum was less powerful machine than C64, “back in the days.”

It seems it’s the coding issue, and in that sense the application acts slow-ish even on the 3GS. I can’t imagine why this is so and I’m hoping that a future update will solve this issue. Moreover, there are some problems with the audio, which will hopefully also be resolved in the next update.

Anyway, the emulator comes with three classic games – Cyclone, Batty and Exolon, and I’m sure you’ll be able to add more games right from the app, as soon as it matures. You play using on-screen virtual buttons, which unfortunately don’t look rubber-ish at all…

Enough said. AppStore link is here (the price is $1.99) and we also have a short demo video to share after the jump. Enjoy!

Snapture no longer a “jailbroken thing”, only! It’s available for 2 bucks from the AppStore!

Snapture Labs and Occipital are bringing their popular photo-taking application to the users of non-jailbroken iPhones. I'm talking about Snapture,...