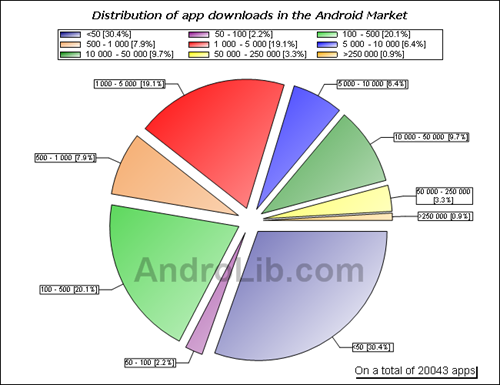 According to the latest number-crunching by AndroidLib, the public Android Market has hit the 20,000-app mark. The majority (62.3%) are free, but don’t think that it means they’re poor – au contraire, mon frère, 44.6% of apps enjoyed a 5/5 star rating. At last count, Apple had 100,000 apps, but they did have a bit of a head start, and for those who have had any experience with the iTunes App Store, they’ll know that quantity doesn’t always trump quality. Developers still aren’t too happy with the money they’re making from Google’s mobile platform, which lines up with AndroidLib’s stat that a solid 30.4% of the apps are downloaded less than 50 times. The figures are unofficial, but it gives us a good idea of how well the ecosystem is doing – we’ll be keeping an eye out for other benchmarks to see how how the Android Market does in the long run.

Update: Google has actually corrected this figure – by their count, it’s closer to 16,000.