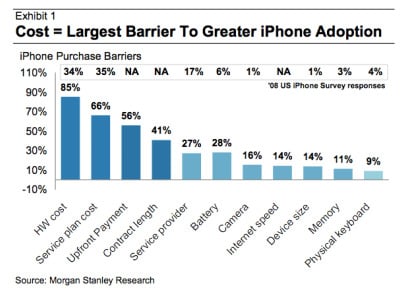 Apple will be bringing out lower-cost iPhones this June with new, gesture-based controls, according to Morgan Stanley analyst Katy Huberty.

In a note to investors, Huberty said research suggests the biggest barrier to iPhone entry for many consumers is the price of hardware, followed by the cost of the service plan. This was the case in emerging markets like China and India, as well as in the United States. I find this incredibly strange because the $200 or $300 you plop down initially is nothing compared to the amount you’re paying over the length of the contract. This idea has been kicking around for a while and some thought we would see the mythical iPhone Nano last summer. Instead, Apple introduced the iPhone 3GS and made the 3G version $99. The bargain iPhone 3G hasn’t hurt sales of the 3GS, as Apple recently said the demand for the latest iPhone has outstripped supply.

“We expect Apple to launch new iPhones in June that offer both a lower total cost of ownership and new functionality, potentially including gesture-based technology,” she wrote in a new note to investors Friday,” Huberty said.

This is where things get interesting because Apple does have a lot of juice now and could possibly get AT&T to lower the costs of data plans for iPhone users. It was recently able to get AT&T to offer somewhat reasonable, contract-less data plans for the iPad. AT&T would be crazy to give away revenue so easily but if this move keeps the iPhone away from Verizon for a few more years, you have to do it. As for the gesture stuff, we’ve seen rumblings to suggest that it will use the camera for a contact-less way of controlling your iPhone. If done right, this could enable you to control your phone without blocking your view or leaving smudges on that pretty screen. Steve Jobs seems pretty excited about the next iPhone, are you?

Good news, everyone! Sprint has posted on their community forums that the webOS 1.4 update we've been hearing so much...