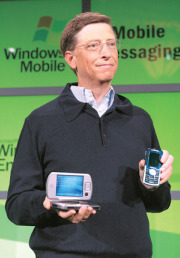 During an interview with ZDNet, Microsoft gave some more details about Windows Phone Starter Edition and it could be a good choice for handset vendors targeting emerging markets.

In the wake of the gorgeous-looking Windows 7 Phone Series, Microsoft still has a fairly usable mobile operating system with Windows Mobile 6.5. Windows Phone Starter Edition will take elements of this OS and create a platform for hardware makers who want to sell phones in Brazil, China, India and other growing markets. Handset makers will be able to get the OS through BSquare, MediaTek or directly through Microsoft. The OS will ship in two versions, with one capable of running Office Mobile. Microsoft did not dive into the exact differences between Windows Mobile and the new Starter versions but it did talk about the capabilities.

It’s a worthwhile strategy for Microsoft to target the emerging markets because these are going to be hot smartphone segments within the next 10 years but the software giant is still charging to license the OS. Microsoft didn’t say how much this costs – and it’s sure to be significantly less than Windows 7 Phone Series licenses – but it is competing with the free Android operating system from Google. China Mobile has already anointed Android its favorite platform and companies like Motorola are planning to flood the emerging markets with low-cost devices based on Google’s OS. Symbian is now also open source and its main backer, Nokia, already has a strong presence in the emerging markets.

Microsoft showed it can be brave in the mobile world by having 7 Series break away from previous user paradigms and compatibility. If it wants to succeed in these high-potential markets Microsoft needs to make Windows Phone Starter Edition free.

Can’t wait to get Flash 10.1 on your smartphone? Well, the case may not be in your favor if you’re...