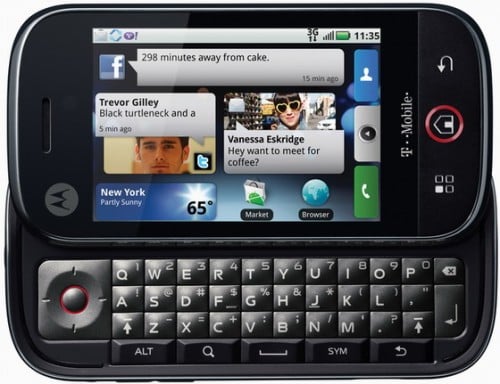 A recent OTA from the big pink magenta gave some Cliq users issues after the install. The update has since been pulled, and is no longer being sent out to users. While there has been no official word from either T-Mobile, or Motorola, if you are a Cliq owner, and receive the OTA, it may be in your best interest to not go through with it.

Now this is not the first time that an OTA update has F’ed, or just partially F’ed an Android device. The ‘update’ seemed to do the exact opposite of the name is bears. The ‘update’ backdated the phones to December 31st, 1969 –7PM to be exact. For those who don’t speak UNIX, the date is the equivalent to ‘zero’ in the language. Users were unable to change the time or the date on their devices, which caused syncing issues. Other problems reported were significant lag throughout the SMS application, virtual keyboard issues, and problems logging into their MotoBlur account.

The closest to thing to an ‘official’ statement we’ve got is from a moderator from the T-Mobile forums:

Hi Everybody!
Thanks everyone for informing us on what the latest Motorola Cliq OTA update has brought to light. We want to let everyone know that we have been reading your comments, and we hear you. We have forwarded your concerns to the appropriate people and are working hard on them.
As of now, we advise you not to Master Reset your phone if your OTA update did not download or if you are experiencing issues at this time.
Thank you for using the T-Mobile forums and we will keep you updated as we gather more information.

Let this serve as a warning to those who see a notification to update their device. You best let your friend with the same phone do it first, just to make sure it’s ok. The worst part about the entire thing is that this update wasn’t even Android 2.1. That’s what I’d be mad about.

Mozilla Fennec Spotted on Nexus One and Droid

Well what do we have here? The Nexus One and Motorola Droid running the Mozilla Fennec mobile web browser? Really?...