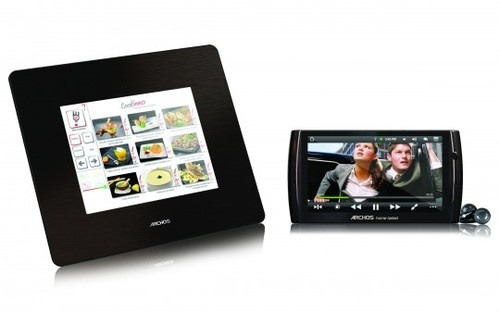 If you’re looking for a tablet but don’t want the limitations or cost of the iPad, you may want to check out Archos because it just introduced two Android-powered tablets that should cost less than $200.

The Archos Home Tablet 7 is more of a mobile Internet device and it looks like a solid way to browse the web, listen to music, check e-mails or use social networks like Facebook or Twitter. It packs a 7-inch touchscreen, WiFi, USB ports and it will come with 2GB or 8GB of storage. Archos is claiming it has been optimized for low battery usage so look for up to 7 hours of battery time. Look for this to hit European markets in April and prices will vary by region and storage capability.

The Archos Home Tablet 8 looks like a glorified digital photo frame and it has a browser, multimedia capability and an 8-inch touchscreen. This will come with 4GB of storage and is expected to hit European markets in May for less than $200.  The devices are also expected to hit the U.S. market later in the year for similar pricing.

Both tablets will use the ARM9 CPUs at 600 MHz, but Archos said it will have more tablets later this year rocking ARM Cortex up to 1 GHz. A big letdown is that it appears these tablets will only be able to use Android apps from Archos’ Appslib store. Android is already facing plenty of fragmentation issues with just the hardware and splitting the app store will only continue to confuse developers. On the plus side, Archos looks to have layered on some interested multimedia software and we all know Android needs a hand in that department. Check out the overly-enthusiastic demo video below for more information on the Archos tablets.

The Android tablet space is actually getting pretty crowded lately, as we’ve seen Philips jump into the game and Dell’s Mini 5 looks intriguing and will soon hit AT&T. Are you looking forward to an Android tablet?

[Via AndroidGuys and Archos (PDF)]

It wasn't too long ago that we first laid eyes (and hands) on T-Mobile Motorola CLIQ XT. The CLIQ XT...