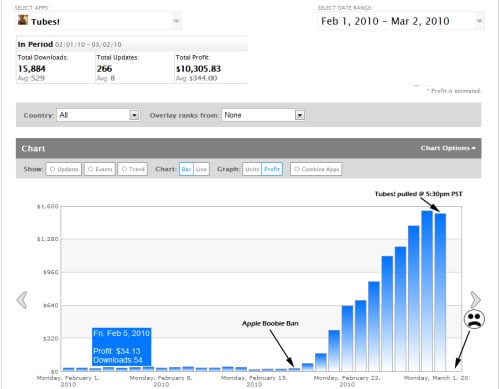 Remember when Apple decided to be our dad and removed all applications with sexual content or innuendo from the App Store? Well, it looks like they missed one and it pulled in $10,000 in a week before being pulled.

A boob app called Tubes! avoided the ban because it wasn’t being sold in the United States and the larger ban appears to have made it skyrocket in success. Prior to the ban, the app was pulling in about $30 a day, but it began pulling in roughly $1,600 a day once it slipped by Apple’s censors.

Tubes! has been removed now but it’s a clear sign that there is an audience for this sort of thing. I don’t think many people are demanding hardcore pornography in the App Store (just use Safari for that), but this heavy-handed approach has the chance to hurt Apple’s platform in the long run. Many of the boob app developers are just getting their feet wet with the development environment and maybe their next app is something special. Apple’s going to have to continue to play whack-a-mole too, and that’s just an inefficient way to manage their platform. Let the audience decide what they want and the let the developers be rewarded for creating appealing content.

It’s also downright disgusting that Apple isn’t applying this ban to old school media types like Playboy or Sports Illustrated. While I completely understand these are established brands I also know that old media is hurting and the next generation of media may very well spring up from the App Store. But this may not happen if smaller creators are faced with arbitrary rules and double standards. Apple’s need for control could make many budding developers seek a more open platform like Android. Treat your customers like adults Apple and you’ll be surprised what happens.