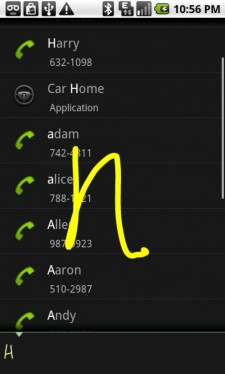 Google has really been churning out their own apps lately. It seems that Goggles, Shopper, Buzz, Earth, appeared relatively quickly one after the other, and now we have Google Gesture Search hot off the shelves.

If you’ve used any of Google’s applications for Android, you’ve probably noticed that they work rather well, even for a version 1.0. Google Goggles was a surprise when it actually did its job without having to wait for an update. Shopper, which is almost obsolete with very similar, possibly more functional applications out in the Market, still  does its job well. Google Earth is just a lot of eye candy, but nonetheless, works great. Gesture Search is no different.

The gesture search application was first demoed at Google I/O 2009, and was expected in the next major update (1.6 at the time.) Nearly a year later, and we have a full-fledged application for it. The application is pretty much to the point. Draw a letter over the screen, the device will recognize the character, and filter through your Applications,Bookmarks,Contacts, or Music. Erasing a letter or entire word that you’ve written is also gesture based, and very easy to use.

I like that the gesture application consolidates all of your content in one place, but I do wish it worked in your native music, and contacts applications. Its’ technically unneeded, but I’d like the option. Gesture Search is a great application that works well, but I wont be relying on it anytime soon.

Google is trying to increase adoption of Buzz and it has just released five tips for using the social networking...