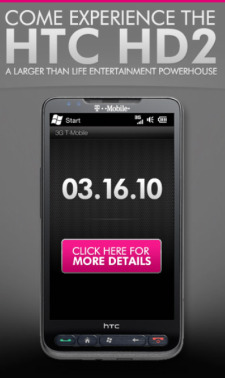 We’re already seeing the HTC HD2 in the wild and we’ll be getting a much closer look at the handset during a T-Mobile event March 16. We’ll know a lot more come next Tuesday, but the stars are aligning for a March 24 release for about $199 with a new, two-year contract.

With a 1Ghz Qualcomm Snapdragon processor, high-resolution 4.3-inch capacitive touchscreen, WiFi, 3G, Bluetooth, GPS, a microSD slot, and Blockbuster On Demand integration, the HD2 would have been positively drool-worthy a few months ago. Unfortunately, this handset will only run Windows Mobile 6.5 and it likely won’t ever be able to upgrade to the intriguing Windows Phone 7 Series.

Putting aside the negativities, this is going to be a beast of a smartphone and definitely one of the most powerful you can get from a T-Mobile store. It’ll come preloaded with the Transformers movies (if that’s your thing), and Windows Mobile is still a more-than-capable operating system. Besides, at least you’ll be able to make your HD2 look like WP7S with cool themes.

The HTC Desire -- the device has got a lot going for it. The Desire is virtually identical to the...