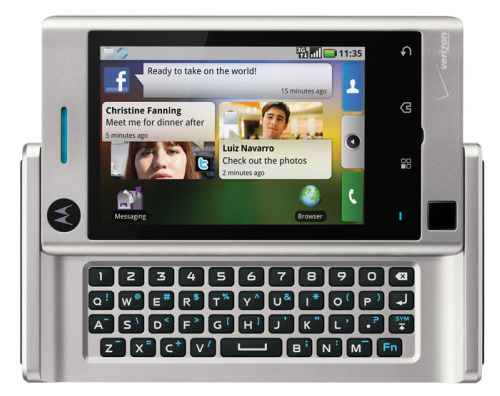 If you’ve been watching my Twitter feed, you’d know I’ve been playing with the Motorola Devour. The Devour is Motorola’s second Android phone for Verizon Wireless and it’s the first to bring MotoBlur to Big Red. The handset is a decent mid-range smartphone for social networking fanatics, but it is underpowered and is nowhere near as good as Verizon’s other Android offerings.

While the Devour may be the younger brother to the Droid, there’s nothing “little” about it. It’s a chunky phone that feels very weighty but good in the hand. The aluminum unibody construction is sturdy as hell and it feels well-constructed. You could throw this thing down the stairs and it would probably be no worse for the wear. There’s a power/unlock button and standard headphone jack on top, and there’s volume controls and a dedicated voice command button on the right spine. One cool thing is that that you can open the left spine to remove the battery or insert a new microSD card. It’s neat but there’s a dingy hinge that looks like it could snap off if you’re not being careful.

The 3.1-inch screen is pretty vibrant and is generally extremely responsive to touch. Unfortunately, it’s way too small for the device. Even without comparing it to the Droid, there’s just seems to be so much wasted space on the face of the device. You can use the on-screen keyboard (or Swype) but I found some issues with getting a quick response when hitting letters near the edge of the screen.

The three backlit touch buttons under the screen really pissed me off. These were very unresponsive, there’s no dedicated search key, and Motorola changed the layout from the Droid so the back button is now on the right side. There’s also too much wasted space between the screen itself and the buttons. There’s also an optical trackpad that works pretty well, but I would have liked it to be a bit bigger and less recessed.

The sliding mechanism is done well and it feels like it will hold up for years. Once you’ve popped the screen up, there’s a weird sharpness on the edges. It’s not like the cheese-cutting Pre, but it is odd. The Devour’s physical keyboard is far better than the Droid’s because there’s more space between keys, there’s a full row for numbers, and the tactility is great. A few quibbles: I’d prefer the function key to be on the left and the space bar is between the v and b letters. Despite these niggles, it’s easy to blast out e-mails or status updates but I’m miffed that there’s no auto-correct for the physical keyboard. I’ve become adept at relying on the software to fill in the gaps for me, so it’s not that much faster to type with the hardware keys. Still, if you’re a physical keyboard fan, you won’t be disappointed with the Devour.

One issue I had with the overall look of the Devour is that it just screams text-happy teen – you wind up looking like some Twilight-reading teenybopper if you’re whipping this out in public. I’m shallow though, so you may not have the same experiences.

Devour’s Android has Motorola’s and Verizon’s hooks all over it. The first thing you notice is MotoBlur, which is a user interface layer that is supposed to make social networking easier and more intuitive. I still think MotoBlur is a good idea but the implementation still needs a lot of work. First of all, the screen is way too small. If you don’t customize it, your main home screen is utterly filled with the Happenings, Messages and Status widgets. I’m a big fan of ambient information on your home screen – I have Slide Screen set up on my Droid and love it – but MotoBlur is just too much clutter without much benefit. Let’s take the Happenings widgets, which is supposed to show the latest status updated from your friends. Cool idea, but I don’t want to have to manually swipe through every single tweet because it’s just tiresome and inefficient. The News widget is cool and I imagine MotoBlur could be really cool on a big-screen device like the Dell Mini 5 or a tablet.

Big Red also has its hooks into the handset, as it comes packed with the carrier’s music, video and navigation apps. There’s also a big, gross “Verizon Wireless” in your notification bar in case you forgot who your carrier is. Like many Android phones, the Devour suffers from too many logos on it.

The Devour is only Android 1.6 but you’re not really missing much. The crown jewel of 2.0, Google Maps Navigation, can be used on the Devour once you download a text-to-speech app from the Android Market. It’s not as smooth as on a Nexus One but it works just fine, and the GPS is darn accurate and quick. There will be some apps that may not work like Google Gesture Search and the whole pulling-up-drawers metaphor needs to die, but you could do a lot worse than this OS. You also can’t have multiple Gmail accounts set up without jumping through hoops, which is an immediate non-starter for me. While Joe Overalls may not care what version of the OS is on the phone, there are real questions about if and when this device can gain multiple new features over the years.

Like all Android phones, you need to know how to manage your device or it will become sluggish. I’m not sure if it’s the processor or MotoBlur but things just seem a half second slower than I’d like it. It’s still better than most of the same phones in this range though.

The Webkit-based browser has a few tweaks from other Android devices and I like it. There’s an extra zoom button on the bottom left that gives you a larger view of the overall page while keeping the section you’re looking at in focus. Big Red does have a solid network, so I had no trouble finding and staying connected on 3G in San Francisco and San Diego. Connecting to WiFi was easy and done the same way as other Android devices. I didn’t have any trouble hopping on to private or public networks.

It’s the normal Android media player, so it’s more than adequate, but don’t get your hopes too high. There’s Verizon’s music app, if you’re into that. Just download Listen and the tunewiki app and your multimedia experience will immediately improve.

The camera sucks. It’s weak at 3 megapixels, things look fuzzy when you’re trying to snap pics, there’s no flash, editing is limited, and the photos looked dark. The Picture Gallery app is better than the standard picture viewer in Android 1.6 and it gives you some cool slideshows. Video recording is fine but nothing to write home about.

Verizon’s network is still pretty darn good, so I had voice coverage nearly everywhere I went. Voice calls sounded a slight bit muffled and I would have liked a bit more volume. People on the other end of the phone said I sounded clear, even when I was talking in the rain.

I thought MotoBlur would destroy the battery life because it’s constantly pulling in news and updates but I was pleasantly surprised that I could get through the day on a single charge. That’s all you can expect from a smartphone nowadays.

I have an appreciation for devices that aren’t bleeding edge but do what they intend well (I dug the HTC Snap). The Devour is a solid device for what it is, and it wouldn’t be too hard to recommend the Devour in a vacuum because it’s a decent smartphone that could appeal to those who love a good physical keyboard. But when you consider that the Droid can be found for nearly the same price and it has a better processor, screen and will be updated more often, I’d have to say it’s safe to pass on the Devour. Check out the unboxing video below.

Mobile World Congress 2010: I came, I saw, I walked away underwhelmed

Three weeks ago today I, and about 50,000 other people, walked through the two towers that stand at the entrance...