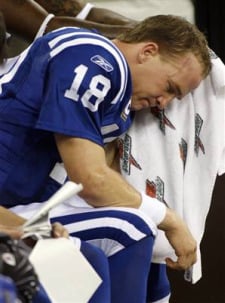 Get ready for some football Verizon Wireless users, as the largest U.S. carrier has struck a deal to get live National Football League games on its handsets.

The deal is reportedly worth $720 million over four years and Verizon subscribers will be able to use their handsets to watch live games on Thursdays and Sundays – NBC’s Sunday Night Football and NFL Network’s Thursday Night Football – as well content around the clock from NFL Network. NFL Mobile will also give you access to the cool RedZone Channel, which provides live looks in to close games or scores across the NFL schedule.

“For Verizon Wireless, it is NFL content delivered over our 3G network so football fans can extend the excitement of the sport long after the last touchdown of a season,” said John Stratton, Verizon’s executive VP, in a prepared statement. “And the NFL content is customizable in that consumers have options from video to ringtones to alerts; the choice is theirs.”

The service will go live before the NFL draft in April, and it will provide live coverage of that event with in-depth videos on those drafted. The app had previously been on Sprint phones and it was bundled with the Simply Everything plans. I used it every once in a while and it was pretty solid. A Sprint representative told Phonescoop it didn’t extend the NFL deal because the third-largest carrier wasn’t sure if it was getting a great return on investment.

There’s no official word on what handsets this will come to but it’s safe to assume it will hit Android and BlackBerry smartphones on Big Red. There’s no word on what pricing will be but we will know in a few weeks. I hope Verizon just bundles it in with its smartphone data plans because I don’t see NFL Mobile being a feature people will want to pay extra for it. As a free, Verizon-only app, I think it could be a valuable tool for retaining customers though, particularly if it is free.

[Via The Wall Street Journal (subscription link) and Verizon]

March Madness will stream to iPhone over 3G

Don't even worry about the "boss button" this year because you'll be able to get your March Madness fix on...