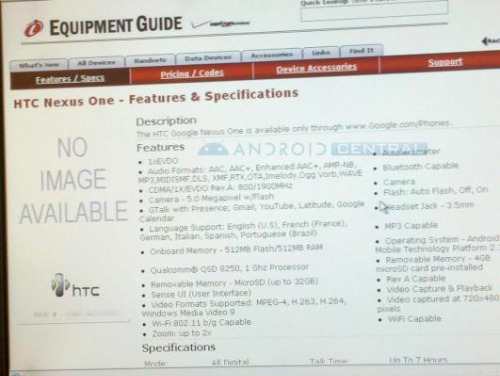 If you want HTC’s Sense user interface on the Nexus One but don’t want to play around with the ROM, you may just have to wait for a few short weeks. According to a leaked equipment guide, Verizon’s version of Google’s superphone will be rocking Sense UI.

Many people are quite fond of Sense, but it’s interesting that Google would let one of its flagship devices have a third-party software layer on top. Hopefully, it will be the latest version of Sense with Friendfeed and the Leap homescreen pinch feature. Big Red’s version will be sold through Google’s phone store which means Verizon customers won’t have a chance to play with the device before purchasing. No word on pricing, but I’d be shocked if it were any more than $179 with a new, two-year contract. All the details should be cleared up soon because we’re hearing rumors of a March 23 release, which could coincide with the CTIA tradeshow.

Update: This one was fishy from the start because the Google phone store URL is wrong (should be google.com/phone). Additionally, the Qualcomm QSD8250 chipset is GSM-only, which means it wouldn’t play nice with Verizon’s CDMA network. Not completely debunked because Verizon has been known to have cruddy spec sheets, but don’t spend much time waiting for Sense on the Verizon N1.

No football, no problem. Sprint has just inked a deal to get ESPN Mobile TV on its handsets. The news...