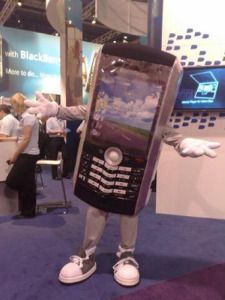 Let’s get ready for the flame wars because a new report from Crowd Science said nearly 40% of BlackBerry users want to switch to the iPhone or Android with their next smartphone purchase.

The company’s survey found iPhone and Android users were extremely loyal to their platform, as about 90% of these users planned to stick to the same operating system when buying the next phone. Android has been gaining some traction, as 32% of BlackBerry owners said they would swap their present phone for the Nexus One, compared with 9% of iPhone owners. It should be noted that the N1 was introduced in the middle of the survey period, which may have momentarily swayed some users.

“These results show that the restlessness of BlackBerry users with their current brand hasn’t just been driven by the allure of iPhone,” said John Martin, CEO of Crowd Science, in a prepared statement. “Rather, BlackBerry as a brand just isn’t garnering the loyalty seen with other mobile operating systems.”

The survey also found that Android and iPhone users are more likely to use their handsets purely for personal reasons, which isn’t much of a surprise. The BlackBerry, by far, is used the most as a business-only device, while Android has a nearly-nonexistent enterprise base.

This isn’t completely surprising because even die-hard BlackBerry fans have to have a tinge of jealousy when Apple gets so much attention and other platforms get cool new apps like Google Maps Navigation. This isn’t just the tech press being enamored with Apple and Google (although that does play a part) because Research In Motion has failed to significantly innovate over the last few years. The Bold 9700 and Tour are top-notch devices and are the best messaging machines but the platform seems to be a bit behind. There are some positive signs – a Webkit browser is on its way, the developer tools are getting better and we’re about to see some new form factors – but I’m anxiously awaiting a complete rewrite of the BlackBerry OS so it can better compete.

So BlackBerry users, is this survey striking a chord, or do you think it’s completely off base?

Rhapsody is preparing an update for its streaming iPhone application that will enable users to access their music even when...