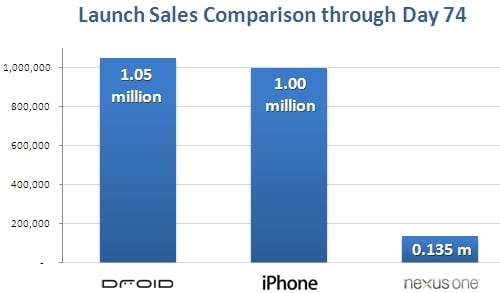 Remember when Apple sent out that press release saying they sold 1 million of their highly anticipated iPhone? Where were you when it hit the newswire? It took 74 days for Apple to do it, and that’s the benchmark that most new phones will be measured against. Flurry, an application analytics firm that claim at least 80% of applications running on the iPhone and Android devices have their tracking software embedded, says that after 74 days of being on sale, the Nexus One has had only moved 135,000 units.

Take this number in context. The Nexus One went on sale after the holiday shopping season, it only ran on one network: T-Mobile, and you could only buy it online. I’m personally responsible for two of those sales (the other Nexus One went to a friend of mine in Finland) and our newest Editor Blake brings that number up to three. Will has one, but he got it for free because he went to some Google event. Bastard.

So is it right to call the Nexus One a failure? We don’t know what benchmarks Google internally, and we don’t know how many Nexus Ones they have sitting in some warehouse collecting dust. It’s a tough call. The fact that the Droid sold 50,000 more units in 74 days compared to the iPhone says that people like Android, so that’s not the issue here. The platform is sound.

Most people who will be using a Nexus One by the end of this year are not going to be using the “Nexus One” straight from Google, they’ll have the HTC Desire, otherwise known as the “Nexus One with HTC’s secret sauce”. I’m more interested to see how those units move rather than the stock (read: bland) Android 2.1 packing Nexus One.

Oh and one more thing … The iPhone 3GS, which went on sale globally, sold 1 million units in 3 days.

It's time to give space on IntoMobile to some other note-taking tool other than Evernote (which I love). :) We'll...